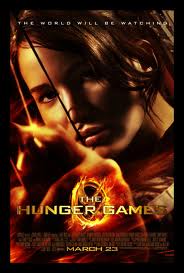 Saw the movie yesterday. . . with my buddy Marv Penner. . . in a Dallas theater. . . that was surprisingly empty. It was energizing to be with Marv and talk about the book, then watch the movie, then talk about our impressions. I’m fully aware from my discussions with others that my commentary is limited due to the fact that I have yet to see the big Hunger Games picture. I’ve only read the first book. I don’t know the rest of the story. . . which I’m sure will make a huge difference in my understanding and thoughts. But here’s what I was thinking as we walked out of the theater. . .

First, I’m getting the connect. Teenagers want to feel strong, validated, hopeful, powerful, empowered, meaningful, important, and significant. They are idealistic. They want to be difference-makers. They long for relationships and love. Blatant oppression and injustice are things from which they want to break free. Katniss Everdeen embodies all those qualities, characteristics, yearnings, and more. She’s “putting it to the man.” She is rising above the heartache and brokenness that has filled the short years of her young life. No wonder she and her story are connecting.

Second, this really is a story that stirs up imagery and thoughts about Hitler’s rise to totalitarian power and the propagandizing control of the Third Reich. District 12 looks like a concentration camp and its young are paraded, controlled and postured like the targets of Hitler’s insane schemes. But while I believe that The Hunger Games can serve as a reminder for a new generation to “never forget,” I fear that the proper reaction against unjust totalitarianism could easily morph into a reaction against the life-giving and redeeming freedom that comes in being a slave to Christ.

And third, I’m not sure I’m seeing the feminist agenda that some critics see in The Hunger Games. Yes, Katniss Everdeen is a strong and bright young woman. Her circumstances have made her strong and determined. She has been strengthened while exercising body/mind and developing skills in order to survive. Just because a story portrays a young lady as strong one should not automatically assume that all males are being depicted as weak or that gender roles are being redefined. At this point, I think this is an unfair criticism.

And finally, I was amazed at the way the radical violence in the story was softened in ways that dulled what could have been especially gory and gratuitous. Once you see the film you’ll know what I’m talking about.

This is a film and a story that our kids are consuming like the hungry Tributes consume their valuable and little morsels of food. They will watch it, chew on it, process it, and digest it with or without us. The latter option offers us a great opportunity to talk about the bigger story – God’s story – and the things that really matter.