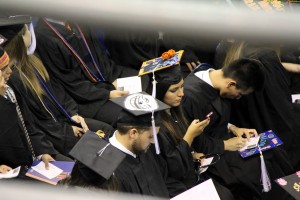 It’s commencement season. That means that a small army of “speakers” have been invited. . . one per institution of higher education. . . to address a gymnasium or stadium full of robed graduates and their parents. And every realistically aware one of those speakers knows that the task they’ve been given is challenging. For four or more years the uniformly attired and neatly rowed graduates have worked toward this moment. The moment can’t come fast enough. To make it worse, they’ve got to sit still and wait just one more time. . . for the man or lady up front to say a few words and then sit down.

I’ve been on both sides. I’ve been a graduate. When I graduated from Geneva College in 1978 I didn’t have a cell phone on which to text, surf the Internet, or watch YouTube videos. My only options were to a) listen, b) appear to listen, and c) fall asleep.

I’ve also been a commencement speaker. When I was asked to speak at Geneva’s commencement several years ago, I was fully aware that the people I was invited to address were either going to a) listen, b) appear to listen, c) fall asleep, or d) text, surf the Internet, and watch YouTube videos. Having been a graduate makes having to be a commencement speaker an imposing challenge since option “a” is the least chosen of the four.

Because of these realities, I keep my ears tuned this time of year to the commencement speeches people are giving. To be honest, many speeches are fully worthy of options “b,” “c”, or “d.” But there are those few that are worth listening to and coming back to over and over again.

This morning I received an email with a link to the commencement address given by Dr. Steve Garber at this year’s Geneva College commencement. Steve is someone I greatly admire and respect. We were students at Geneva at the same time. He was older, wiser, and whole lot smarter than me. He’s still older, wiser, and a whole lot smarter than me. That’s why I took the time to see what Steve laid on the class of 2012.

You can read Steve’s entire commencement address here. I simply want to pull out some words that brought tears to my eyes as I read them this morning. Steve was honest with the students. No, life is not some magical fairy tale that always ends up looking nice. It’s full of unexpected surprises. Neither is it about self-fulfillment. Here are those words from Steve. . .

Who will you be? What will matter to you? How will you work out what you have learned in the way that you live? Will you become men and women marked by the coherence of the kingdom? By a deeply graceful seamlessness between what you say matters most, and what in fact does? Will your educations be the light onto the path of your vocations, offering contours that make sense of what you do and why you do it, of where you live and with whom you live?”

And, I wish that somebody had pulled me aside to say those things to me as I embarked on life as a wide-eyed and naive 21-year-old college graduate. I have learned just how important, real, and true those words are. It’s for that reason that we need to keep stating and restating those words to ourselves and to others.