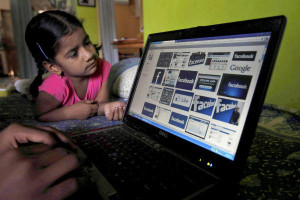 So social networking giant Facebook – now the third most populated “country” in the world – is considering a planned “baby boom.” OK. . . so they’ve already got millions of kids under the allowed age of 13 already “living” within their boundaries. . . all of them on there as a result of ignoring Facebook’s rules, either with or without parental permission, the former being pretty doggone troubling.

I would side with those who say this isn’t only not a good idea, but it’s a horribly bad idea. Supporters of the shift will scoff at the notion that allowing young kids on Facebook is anything less than harmless. But will that be the case? My starting point is with what I’ve been learning as a part of loads of research for our growing Digital Kids Initiative here at CPYU. All you have to do is take a look at some of our handouts and fact sheets, including our Primer on Social Networking and Primer on Electronic Addiction. Then, add just a little bit of common sense that’s been steeped in careful observation of the kids and adults that we already know have been shaped in negative ways by too much social media and a lack of personal boundaries or thoughtful engagement.

This week I’ve been hunkered down with a new doctoral cohort in our Ministry to Emerging Generations track at Gordon-Conwell Theological Seminary. One of our Korean students is passionate about teaching media literacy to his students. He’s used the term “mediaholics” several times in his description of their media use.
I think we need to listen carefully to our Korean friends as they’ve not only recognized that the South Korean population has a deep documented problem with electronic addiction, but they are wisely and out of necessity working to develop preventive strategies. And that’s where I think we need to begin on this question of Facebook and kids younger than 13.

Some initial thoughts on why I think Facebook for the younger set shouldn’t be an option. . .

1. Where they’re at developmentally. We are learning more and more about the biophysiology of the human brain. Do we really think that removing options for spending time in play, human interaction, reading, writing, etc. and replacing them with static time in front of a screen is a good thing? Take a look around your neighborhood this summer. If your neighborhood is like mine, you’re seeing fewer and fewer kids playing outside. It’s not because there are fewer kids. It’s because there are fewer kids playing outside with each other because they are inside glued to some kind of screen. Do we really need more of that? Let’s give it a few years here until these kids grow up and the research starts to roll in. I’ve got a strong more-than-a-hunch that our mistakes and foolishness will be exposed. Little kids are extremely vulnerable. Their brains are forming. Why would we risk endangering them at the level of their developmental vulnerabilities?

3. The danger of too-much too-soon. More time online means more exposure to images, ideas, worldviews, etc. David Elkind warned us years ago about the danger of actively or passively pushing kids to grow up too soon. Why would we choose to push them into the world of adult ideas, pressures, and actions when they need to be allowed to be kids?

4. Exposure to advertising. Fact: children and teens are the most targeted market segment in the world. Fact: children are the most impressionable and easily-swayed market segment in the world. Facebook time will translate into exposure to hundreds of thousands of additional advertising messages. Ads sell product. But ads are even more effective at selling a worldview. Why would we want to sit them down in front of even more commercials?

6. Retarding socialization. Flesh-and-blood relationships with a diverse multi-aged group of family and friends is necessary to healthy socialization. Sitting on a screen curating yourself through photos and posts fosters aloneness. . . not a well-adjusted socialized self. Chances are we’d be throwing “miracle-grow” into the soil that fosters a lack of ability to look others in the eye, carry on a conversation, and answer with anything but a grunt or groan.

I know that today I’m sounding a little old and cranky. I’d like to think I’m being realistic.