Forty years ago, youth culture trends tended to travel geographically. As an east-coaster, all a guy like me would have to do is look at what was happening on the left side of our country. That “crystal-ball” glimpse would offer insight into what would travel east to land a few months later on and in the youth culture landscape of our side of the continent.

In today’s world, youth culture trends tend to travel demographically. Instead of moving from left to right, trends now move from top to bottom. In other words, if you take a look at older young people, you’ll catch a glimpse into the values, attitudes, and behaviors that younger kids will be living out in just a few short months. That’s the trickle-down phenomena known as age-compression. If I want to know what a 12-year-old will be living out next year, I might want to look at what a college student is living out this year. 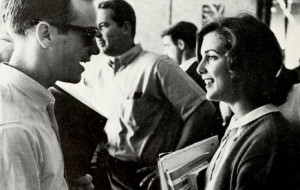 I was reminded of these tendencies last week when I opened an email from a high school principal. . . a high school principal at a Christian school I might add. He was thanking me for what CPYU does to inform parents, youth workers, and educators about current cultural trends. At the end of his email, he gave me a heads-up about something I seem to have missed: “The September issue of The Atlantic includes an article titled ‘Boys on the Side.”‘ In it you will learn (at least, I learned) that, among college kids in Ivy League schools, snowblowing is not something you do to your driveway and pink socks have nothing to do with the laundry!  I think parents remain terribly naive about how pornography has become a blended, unnoticeable part of our cultural landscape.”  Of course, that led me straight to Google and a hunt for “Boys on the Side.”

Hanna Rosin’s piece on the hookup culture on college campuses is one that I’m sure most of you will find both eye-opening and alarming. I learned – along with the Principal – that “snowblowing” is also know as “snowman fellatio” . . . or performing oral sex on a snowman. I also learned that this is indicative of kind of stuff that is so commonplace that nobody on the college campus sees it as anything other than normal. Rosin says that it’s all so commonplace that barely anyone even notices the vulgarity anymore. She does mention one exception. . . an Argentinian student who had just arrived in the Ivy League version of campus culture two weeks before. Rosin recounts her encounter with the female student: “‘Here in America, the girls, they give up their mouth, their ass, their tits,’ the Argentinean said to me, punctuating each with the appropriate hand motion, ‘before they even know the guy. It’s like, ‘Hello.’ ‘Hello.’ ‘You wanna hook up?’ ‘Sure.’ They are so aggressive! Do they have hearts of steel or something? In my country, a girl like this would be desperate. Or a prostitute.’ So there we have it. America has unseated the Scandinavian countries for the title of Easiest Lay. We are, in the world’s estimation, a nation of prostitutes. And not even prostitutes with hearts of gold.”

That folks, is a window into the world of our current campus culture. When we’re in it, we have a hard time seeing it. Sometimes it helps to look at ourselves through the eyes of someone other than our selves. You should spend some time reading Rosin’s article, “Boys on the Side.” And as you read, remember that youth culture tends to travel demographically. What is happening on the college campus today, is trickling down to the middle school campus of tomorrow.

Minister accordingly. Parent accordingly. There’s a much better map to follow. And for the most part, that map isn’t found on campus.