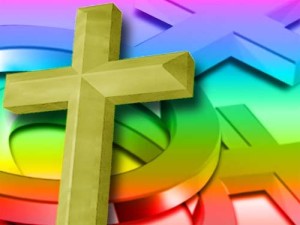 I didn’t sleep well last night. Another conversation about homosexuality was something I was a part of yesterday. There have been plenty of these conversations. . . more and more, in fact, in the last few months. But the issue is rising quickly to the point where we must all intentionally resolve to read, study, pray, consult. . . and then come down somewhere. I’ve been working to figure out how to best help parents, youth workers, and others do that. I’ve been traveling on this journey for some time. Today, it’s becoming more intentional and directed.

My conversation yesterday was with a table full of highly-respected Christian friends. Each of them have had a profound impact on my life and ministry in some way. But it was evident that we don’t all agree. And, our disagreement is evidence of the fact that the “us vs. them” battle that once raged with a fairly well-defined line in the sand between the church and the world isn’t that well defined any more. On the one hand, this is a very good thing. What it means is that more and more followers of Christ are realizing that we haven’t taken the time to understand the issues, to understand the Scriptures, and to understand the grace and mercy of Christ that we are called to show to those who wrestle with same-sex attraction. The issue needs to be raised and we need to wrestle with it. It’s time. God does not hate fags.

But I’m still working to process the “on the other hand” that I left the table feeling. It was clear that all of us around the table have been engaged in the much-needed process of developing the aforementioned understandings. Cultural realities demand engagement in this process. But there was a lack of unanimity around the table. Perhaps I shouldn’t have been surprised. If we had had the time to really unpack our individual journeys with deep honesty I’m thinking that we would have told a variety of stories (both our own stories and those of others), we would hold to differing views of Scripture, we would vary in our hermeneutic, and we would be coming to a variety of different conclusions on matters related to homosexuality, same-sex attraction, discipleship for homosexuals, gay marriage, and homosexual sexual activity. . . to name just a few things.

At this point in my own journey, I believe (as I’ve been saying for a couple of years now) that this is going to be a primary defining issue for individuals, for families, for churches, and for youth ministries. It’s also going to be very, very divisive. New lines are going to be drawn in the sand. I also know that many of us may lose friends. . . not because of a lack of compassion. . . but because we don’t agree on the ethical questions related to the issue. People will get mad.

In our conversation yesterday someone relayed the words of one prominent Christian thinker on this topic regarding our starting point. He said, “We must start by knowing our sexual ethic.” I agree. The reality is that once we know our sexual ethic, we will have drawn a line in the sand and our “camps” will be established. The dividing lines will have been drawn.

Over the course of the last couple of weeks I encountered some things that have driven me deeper into pondering, praying, and searching the Scriptures for increased clarity, and to double and triple-check where I’ve already landed on this as a Christian. I will continue to do that, especially when friends who might not agree with me might not agree with me. I want to respect and honor them by constantly checking myself. Without apology, my starting point has to be the Scriptures. . .  not my feelings, not my political leanings, not the prevailing spirit of the times (“Zeitgeist” as the Germans call that). . . whether that’s the zeitgeist in the church or the zeitgeist in the culture. I also want to be a person of grace. . . first and foremost to those who deal with same-sex attraction, and then to those who may disagree with me and my sexual ethic on these matters.

What is it that I’ve encountered over the last couple of weeks? First, there were the conversations I had while touring Washington State and Idaho with Jason Soucinek on behalf of our CPYU Sexual Integrity Initiative. Second, there was the “have you seen this?” email from a friend containing the Amazon Paper White Kindle commercial (see below). Then there’s the local birthing center’s ad from Hallmark and the greeting card company’s willingness to customize their newborn record products with an “additional Mommy” or “additional Daddy.”

As ethicist Dennis Hollinger says in his book The Meaning of Sex, “Christian ethics is the moral ideal to which God calls believers in life. Rooted in the character and actions of the Triune God, the Christian ethic is known through divine revelation, motivated by redemption in Christ, and empowered by the indwelling work of the Holy Spirit.” Because of what I read and know from the Scriptures, we are called to exercise a counter-cultural presence in the world. It’s for that reason that I must default to a position informed first and foremost by the revelation of God in Christ and the scriptures. At the same time, I need to battle my natural inclination to default to a natural theology – the kind that’s so prominent in our culture today – to “just celebrate and embrace who you are.” That would be downright dangerous for me in my own heterosexual sex life.