Over the course of the last few months I’ve from time to time thought-out-loud and weighed in on the timely high-profile topic of homosexuality as it has taken center stage as an issue in our culture. I’ve had conversations with young people who have assimilated and adopted now-widely-held viewpoints and assumptions thoughtlessly, simply as a result of swimming in the soup of today’s youth culture. I’ve also had conversations with people on the polar opposite side of the issue. Because these folks tend to be older, they assume they’ve been much more thoughtful about their conclusions. Many of their viewpoints and assumptions have – in all honesty – been assimilated with an equal lack of thought as a result of swimming in the soup of today’s fundamentalist church culture. To be honest, I have to humbly confess that some of my leanings have been toward the latter.

Because we need to address this issue with conviction and clarity. . . and because we are followers of the Christ who created us with minds, we need to be thinking, praying, and discussing with greater determination, care and depth. My meager attempts to do so at the best levels I can are resulting in some blog posts. . . including today’s.

Once again, I want to make clear that I have a high view of the Scriptures that I am unwilling to compromise that foundation. I want to submit my life, thoughts, and opinions to the Lordship of the One who has revealed Himself in the Bible. I am unwilling to adjust or shift this foundation to accommodate cultural attitudes. I believe that homosexuality and same-sex attraction are not what God has intended for our sexuality. Homosexual behavior is wrong. Beyond what I believe, I also want to submit my actions and my interactions on these issues – with those who may agree or disagree with me – to those same Biblical convictions. I want to honor Christ in my doing. That’s one reason why I’m valuing the dialogue I’m having as result of thinking out loud on this blog.

Yesterday morning, I was sitting at my computer answering a question from a woman who wanted to know about the use of the term “Gay Christian.” I had used that term in the title and body of my blog on Wesley Hill’s book, Washed and Waiting. She spoke of a young teenage boy she knows who is struggling with these very same issues as a Christian. His fear, she says, is that if he would admit to others that he is gay then he would be expecting the fact that he was born to be gay, and would live the life style. I understand how that’s such an easy conclusion for a kid to come to. . . after all, Lady Gaga both maps and mirrors this cultural attitude in her song “Born This Way.” It’s a foundational naturalistic assumption. . . you were born gay, God (or whoever) made you this way, so go ahead and celebrate and indulge your homosexuality. 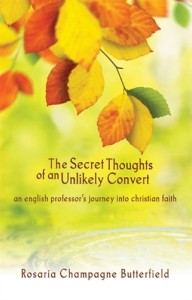 I encountered this type of thinking in a book I’m currently reading. It’s Rosaria Champagne Butterfield’s, The Secret Thoughts of an Unlikely Convert: An English Professor’s Journey into Christian Faith.  It’s a book worth reading. Butterfield is a pastor’s wife and a woman of deep convictions and faith. Her deep convictions were formerly directed towards her outspoken defense of radical feminism as a lesbian and professor at Syracuse University. (Perhaps you’ve seen the little article on Butterfield that appeared recently in Christianity Today). In her book, Butterfield relates this encounter as she was beginning to wrestle with the Christian faith and the claims of the Gospel: “During this time of struggle, others tried to help. A Methodist pastor and Dean of the Chapel at Syracuse University believed that I did not have to give up everything to honor God. Indeed, he told me, since God made me a lesbian, I gave God honor by living an honorable lesbian life. He told me that I could have Jesus and my lesbian lover. This was a very appealing prospect. But I had been reading and rereading scripture and there are no such marks of postmodern ‘both/and’ in the Bible.”

Without diligence and a willingness to be nurtured in the faith, it’s easy for so many to default to a cultural foundation that reshapes Biblical truth to the point where it’s no longer true and no longer anything close to Biblical. It’s especially easy for our kids.

In my answer to the woman’s question I passed on these words: “Have you read Washed and Waiting by Wesley Hill? He is a young Christian who is gay and who loves Christ and the Gospel. He is choosing to live in obedience to Christ knowing full well that his homosexuality may never be miraculously lifted off. . . he says it may be something he will struggle to deal with obediently for the rest of his life. I highly recommend his book. He actually addresses the issue which you are asking about – Here’s what he writes: ‘I’ve taken care always to make ‘gay’ or ‘homosexual’ the adjective. , and never the noun, in a longer phrase, such as ‘gay Christian’ or ‘homosexual person.’ In this way, I hope to send a subtle linguistic signal that being gay isn’t the most important thing about my or any other gay person’s identity. I am a Christian before I am anything else. My homosexuality is a part of my makeup, a facet of my personality. One day, I believe, whether in this life or in the resurrection  it will fade away. But my identity as a Christian – someone incorporated into Christ’s body by his Spirit – will remain.'”

As I closed out the window after sending my response, another message simultaneously came in from a trusted and respected Christian friend who has been and is thinking deeply about this issue. He says that homosexuality and the same-sex issue is “the most tender, the most complex and the most volatile conversation that we have in the years of the early 21st-century.” Wise words. . . which means that we have to foster wisdom and choose our words and the way we say them wisely.

Last evening, another trusted and respected Pastor-friend posted this comment in response to my last blog: “There is one thing that needs to be learned within the Christian community….and it is this. There is no such thing as a Gay Christian. There are Gay-identified Christians but not Gay Christians. God doesn’t create people who are gay or lesbian. That means there are no ex-gays….only people who have had same-sex attraction, identified themselves as being gay and then chose to lead more toward heterosexuality (how they were born) or celibacy. When we say someone is a Gay Christian it gives the idea that is how someone was born.”

While I appreciate that perspective and continue to weigh it, I’m wondering if a healthy biblical doctrine of sin and the fall allows for the brokenness of shalom to extend to the development of sexuality from the time of conception through development in the womb? I believe that we have to consider this seriously. There are certainly all matters of biological/physiological types of defects which occur in the womb. Could homosexual orientation/disposition be one? And, if that’s the case, could Wesley Hill’s description of his personal reality and choice of descriptive terms be legitimate? And if so, can we offer careful clarification of term “Gay Christian” in ways that clearly distinguish between usage of the term that justifies indulgence and usage of the term that recognizes human fallenness and a call to Godly flourishing? While we must recognize that many in our culture – maybe even the majority – consciously choose a homosexual identity and engagement in homosexual behavior, is it at all possible that there are some who are indeed, born this way? And if so, what does that mean for the Christian who desperately desires and prays for change, but the change never comes?

Addition/Update posted on February 20, 2022: Update. . . I came back to this blog post this morning almost nine years since writing it. As I stated then, I was in process on this. Working to learn, sort out, etc. . . all under the authority of Scripture and in conversation with others. In the time since then, I have concluded that my initial thoughts on stating one’s identity as a “Gay Christian” were wrong. As believers, we are to always find our identity as image-bearers who are in Christ. When we clarify who we are, we always must say “I am a Christian.” I also believe that for the individual who believes in chastity prior to marriage and faithfulness in monogamous heterosexual marriage (the clear biblical position), there’s a huge difference between saying one is a “Gay Christian” and one is a “Christian who struggles with same-sex attraction” . . . which is a broken desire. Our primary identity is in our Lord and Savior Jesus Christ. . . nothing else.