Anybody who’s watched the news, read the paper, or accessed any online news outlets this week knows that North Korea is making threats, that film critic Roger Ebert has died, and that Rutgers University has some major problems with their basketball program. 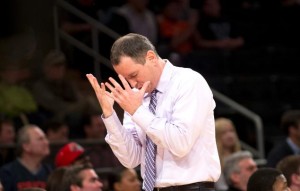 The story coming out of Rutgers, the state university of New Jersey, continues to unfold. The story went public with the release of a video showing Rutgers head coach Mike Rice acting like a spoiled, angry child as he conducted basketball practice with his team. Rice was shown throwing basketballs, hitting, yelling, cursing, and shoving. . .  with his players on the receiving end of it all. Once the story went public, Rice was fired. The story became even more complex yesterday as Rice’s assistant coach, Jimmy Martelli, resigned after video footage showed him engaging in the same kind of behavior with the team. In effect, Martelli had become Rice’s “Mini-Me.”

As you can imagine, the Rutgers University community is in turmoil. Several university faculty members are speaking up and calling for the removal of AD Tim Pernetti and school President Robert Barchi. Concerns are that Pernetti and Barchi have known about these issues for some time and effectively chose to cover them up or even look the other way. Not surprisingly, a moment like this offers university faculty the chance to remind the university community about what should be most important in term’s of an academic institution’s function. But if we are honest, sports – for many – have eclipsed learning in terms of what’s valued most highly at our institutions of higher education. All one has to do is look at the fact that Rice was making $650,000 a year in base salary, along with extra incentives for winning. I’m guessing that there isn’t one faculty member at Rutgers making even a quarter of Rice’s salary. As the old saying goes, our checkbook is an indicator of our priorities.

Mike Rice and Jimmy Martelli aren’t the only human beings in our culture to have crossed the line in their treatment of other human beings within the context of athletics. Our sports culture – at every level – is increasingly populated by everyone from parents of pre-school soccer players, to coaches, to professional athletes whose words and actions show a growing lack of civility or a commitment to the value of persons. Our words and actions indicate that sports has become ultimate. Winning, achievement, and success are valued above the forgotten virtues of sportsmanship and fairness. A sports’ culture that should be about things like play, fun, and character development has derailed. . . . and that’s not a good thing at all.

I was thinking about the Rutgers story  – and what it tells us not so much about Rutgers but about ourselves – this morning when a good friend called to check in. During the course of our conversation he informed me that he had given up sports for Lent. For forty days, he stopped watching and following sports on television, online, and in the paper. Instead, he spent that time reading in an effort to nurture his Christian faith and soul. He told me two things resulted from his forty day fast. First, he was refreshed and renewed. In effect, he advanced and grew as a human being. Second, he realized that “sports is my God.”

Those are challenging insights. Last night I went to bed after checking the final scores for the Phillies and Flyers. To be honest, I was happy that both had won. Somehow, I think I knew I was going to sleep better. I’m a Philly sports fan. That’s how I grew up. It’s in my DNA. . . and consequently, I probably don’t notice just how important (ie. too important) it all is for me. While I have worked hard in recent years to keep it all in balance, stories like those coming out of Rutgers combine with the words of my friend to force me to look deep into my own heart.

In his book Counterfeit Gods, Tim Keller reminds us that the Bible says that our hearts are “idol factories.” In Ezekiel 4:3, God says about the elders of Israel, “These men have set up their idols in their hearts.” Our culture feeds our idol frenzy. I love how Keller defines and describes idolatry: “What is an idol? It is anything more important to you than God, anything that absorbs your heart and imagination more than God, anything you seek to give you what only God can give. A counterfeit god is anything so central and essential to your life that, should you lose it, your life would feel hardly worth living. An idol has such a controlling position in your heart that you can spend most of your passion and energy, your emotional and financial resources, on it without a second thought. It can can be family or children, or career and making money, or achievement and critical acclaim, or saving ‘face’ and social standing. It can be a romantic relationship, peer approval, competence and skill, secure and comfortable circumstances, your beauty or your brains, a great political or social cause, your morality and virtue, or even success in Christian ministry. When your meaning in life is to fix someone else’s life, we may call it ‘co-dependency’ but it is really idolatry. An idol is whatever you look at and say, in your heart of hearts, ‘If I have that, then I’ll feel my life has meaning, then I’ll know I have value, then I’ll feel significant and secure.’ There are many ways to describe that kind of relationship to something, but perhaps the best one is worship.“

Thinking about idolatry – specifically the idolatry of sport that’s become so common in our culture – I thought back to something I read last month from my friend Denis Haack. Denis runs Ransom Fellowship and publishes a wonderful little magazine called Critique. In an editorial entitled “A Very Comfortable Alienation,” Denis writes about a phenomenon that’s slowly spreading over our social landscape. It’s “the tendency, or ability, to become comfortable with the alienation that is our common legacy as fallen human beings.” Denis says that we know that we are broken people who live with the ever-present sense that death dwells in the heart of our alienation. So, we pursue our diversionary idols in an effort to “get comfortable with our sense of  alienation: busyness, power, medications, technology, self-confidence, political, or economic, or social ideologies. Fill your life until there are no margins and suddenly you feel less alienated. And so we do.”

We can add a whole lot of other things to Denis’s list. . . including sport. Pay careful attention this weekend. . . to your culture and to yourself. Thousands will gather to worship in a host of temples around our country – including one temple named “The Georgia Dome” – filling their time with way-too-deep allegiances in an effort to dull the ache. Millions more will tune in from the comfort of their own homes. And if what we see happening within us extends beyond fun and enjoyment into the realm of ultimate obsession. . . well, then we are no different than  Mike Rice and Jimmy Martelli. We don’t need to give up sports. We just need to give up giving sports too much.