Horrible and horrifying. . . that’s what it was. Like most of you, I got to the television as soon as possible to catch the reports and updates as they came out of Boston. That’s how we get the news these days. It’s in real time and we get a live, front row seat. As the evening went on, we learned details. Three people dead. Dozens maimed and injured. When it was announced that one of those killed was only 8-years-old, that death made the whole thing that much worse and the entire story became even more horrifying. The fact that this was not some kind of accident or natural disaster adds to the horror and disgust. Somebody took the time to think this through. . . to do this. . . to pull this off. This is certainly not the way it’s supposed to be and we all know that. This was bad. It is without a doubt front page news.

In the midst of all of yesterday’s badness that unfolded in Boston, there was something else happening. . . (I would refer to this something else as “badness” as well) . . . that most of us didn’t notice. We didn’t notice it because it is ambient in our culture and our lives. It’s how the media subtly twists and manipulates stories, and thereby subtly twists and manipulates us as we watch. What we can’t forget is that news media mediates the news. We see and hear what they want us to see and hear. . . from the stories we see and hear, and how we see and hear those stories. Within 10 minutes, I had already seen the raw and primitive video footage of the blasts loop through at least a dozen times. I have to wonder, is that really helpful? And, I have to wonder, how does that barrage serve to manipulate my emotions and/or desensitize me? I also remembered that the gruesome footage of the JFK assassination contained on the Zapruder film was never publicly shown in its entirety until twelve years later. Times have changed. 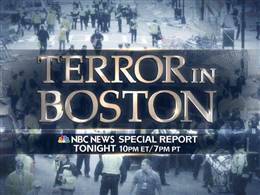 After my initial 10-minutes of watching the live feed from Boston late yesterday afternoon, I mentioned to my wife (with admitted cynicism) that the evening news and all reports that followed would include carefully crafted graphics (three words max. . . that lend themselves well to monotoned voice-overs), musical soundtracks, and video montages that are designed to draw out a deep emotional response. And with so many media outlets jockeying for “scoops” and viewers, the one who does the best job is the one that’s going to win. It happened. . . and predicting it wasn’t rocket science on my part. Did you watch any television last night? Not only that, but I wonder if the rest of use our own social media outlets to let others know that we’re with them in the moment and that somehow we’re still relevant for the simple reason that we’re chiming in and making social media noise? For example, can we read anything into the fact that many of us on social media weren’t so much requesting prayers for those who were suffering, but that we ourselves were “praying for” those who were suffering? Why do we find it so important to tell others that we are praying? Shouldn’t we be doing that quietly while hidden in our closets?

I awoke to the same thing in the news media this morning. The story was front page news. . . and so it should be. The editorial a few pages further was titled “Boston Massacre”. . . a most appropriate title as the word “massacre” is defined as “the unnecessary, indiscriminate killing of a large number of human beings or animals, as in barbarous warfare or persecution or for revenge or plunder.” And while our local newspaper didn’t seem to go to the same lengths of manipulation and staging as broadcast media, there was something significant about today’s newspaper that struck me. . .

The front-page headline that saw when I picked up the paper at the curb reads, “Terrorism suspected in Boston; 3 dead, 140 hurt.” OK. . . that’s factual, to the point, and appropriate. Then I turned to page 3 and saw this headline buried a few inches down the page: “Doctor testifies against fellow abortion provider.” That article reported on the mostly-forgotten-by-the-media trial of Philadelphia physician Dr. Kermit Gosnell, who was arrested two years ago and charged with performing the late term abortions of seven babies who were born alive. He was also charged with causing the death of a patient. The charges and details are absolutely horrifying. . . but the media has kept the story fairly quiet by not giving it significant attention. Perhaps the most outrageous detail of all in today’s news story mentions the name and “resume” of the testifying doctor, Charles Benjamin, with these words: “Benjamin, by his own count, has performed 40,000 abortions over a 30-year career.” Estimates are that Kermit Gosnell performed about 30,000 abortions over the span of his career.

The Vietnam Veterans Memorial Wall has 58,272 names on it. This story was deemed worthy of third-page news. . . or maybe no news at all. Has anyone used the word “massacre” in reference to the Gosnell story?

Horror happened in multiple places and in multiple ways all over the globe yesterday. . . not just in Boston. . . most of it unnoticed by the rest of the world. There are people who live in legitimate fear and the reality of these things 24/7/365.

We are horribly broken. God have mercy on us sinners. And let’s not forget the first three words of Psalm 93: “The Lord reigns. . .”