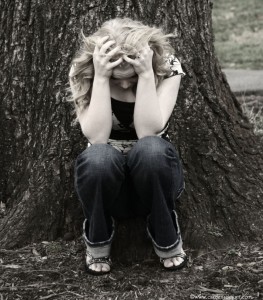 These are words from a 15-year-old’s suicide note: “I can’t handle this sucky world any longer.” My first encounter with teen suicide came in the early 1970’s when a childhood neighbor and friend took her own life as a high school student. Just a young kid myself, it was confusing, dark, and difficult to think about. But it was real. Sadly, it wasn’t my last encounter. If you’re in youth ministry, you encounter it way too much.

Experts now remind us that since we are in the Spring, teen suicides will most likely once again be on the rise. While the reasons for this are many, one that stands out is that springtime usually makes us feel good. Kids who are not feeling good and dealing with depression are especially sensitive to the fact that everyone else is feeling good. Contrasting their own moods with those who are happy can trigger suicidal thoughts and attempts.

Youth workers and parents should be thinking about how to recognize the signs of depression and suicide so that they can intervene to help kids move from hurt to healing. I want to invite you to join me for a free one-hour webinar – “Suicide, Depression and Hurting Kids: You Can Save a Life!” – that I am hosting on Thursday, April 25th, at 1pm (Eastern Time). I’ll be having a conversation on hurting kids with CPYU Associate Staffers Rich Van Pelt and Marv Penner. With years of counseling and crisis intervention experience between them, Marv and Rich are uniquely equipped to help you understand the signs of risk, and to prepare you to act on behalf of desperately hurting kids. Rich and Marv will help you know what to look for and what to do when you suspect that a student might be suicidal. In addition, we will point you to some helpful resources on helping hurting kids that you can use in your church and community. You can register here.
Here are some teen suicide facts and figures from my book, Youth Culture 101:

Today, suicide is the eleventh leading cause of death in the , and the third leading cause of death among teenagers. While suicide accounts for 1.3 percent of all deaths in the , they comprise almost 12 percent of all deaths among 15 to 24 year-olds. Every two hours and 11 minutes, a person under the age of 25 completes a suicide. Official statistics indicate that roughly six thousand teens a year take their own lives, but that number is believed to be low since many suicides are reported as accidents in an effort to protect a family’s privacy or to secure insurance settlements. At times, a family will rearrange the scene to hide the suicide, and some will even go so far as to hide the suicide notes. In some cases, coroners will only report those deaths where a note is found as a suicide. In other words, the real number of teen suicides is much higher than the official number.
The growing number and intensity of problems associated with passing through the teenage years have contributed to this crisis. The teenage years are already a period of storm and stress. Add to that the societal factors that have made adolescence more and more difficult, and a growing number of adolescents are thinking about or attempting suicide. It comes as no surprise that the rate of suicide among 15 to 24-year-olds has tripled since 1960. Along with heart disease, suicide is the fifth leading cause of death for 5 to 14-year-olds.
The teen suicide crisis has led researchers and the government to examine the problem closely. Many studies and surveys have shown that suicidal thoughts and considerations are far more prevalent than anyone ever knew. One national school-based survey of ninth through twelfth graders found that during the twelve months preceding the survey, 16.9 percent had seriously considered attempting suicide, 13 percent had made a specific plan about how they would attempt suicide, 8.4 percent had actually attempted suicide one or more times, and 2.3 percent had made an attempt that required medical attention.
High school-aged girls were more likely (21.8 percent) than their male peers (12 percent) to have thought seriously about attempting suicide during the previous twelve months and were significantly more likely (10.8 percent) to have attempted suicide than males (6 percent). Girls typically choose more nonviolent methods such as pills, carbon monoxide poisoning, etc.
While fewer boys than girls will attempt suicide, the success rate among the 15 to 19-year-old age group is 4.4 times greater than that of girls. The reason for this difference is that males typically choose more violent means such as guns and hanging. The highest rate of teen suicides in is among white males.
There are those who would argue against using the word epidemic to describe the current suicide situation among our teenagers. But the statistics and hard facts tell another story. Suicide has become like a disease among the teen population, and as with any other communicable disease, those who know someone who has it are at risk to contract it themselves. Suicide “clustering” is a phenomenon that suggests that those who have friends or family members who have committed suicide may “catch” the inclination to follow and do the same. Several years ago, officials at one high school canceled final examinations and the graduation ceremony after they learned of a possible suicide pact among the friends of a student who had shot and killed himself at home over Christmas. Some of these students had told others that they were planning on making the graduation a memorable one that nobody would forget. These clusters of suicides typically take place in middle- and upper-middle-class neighborhoods with a transient population. The lives of these kids are filled with numerous stresses, including high levels of divorce among their parents, two-career families, pressure to perform, and the absence of an extended family. In addition to these pressures, their situations are often complicated further by frequent family moves or best friends moving out of town.
But don’t be fooled. Suicide doesn’t play favorites. Teens of every age, from every socioeconomic group, geographic area, and type of family situation have become statistics. Many of our children and teens are at high-risk for suicide. As parents and youth workers, we must realize that the normal pressures of adolescence have coupled with societal factors to leave all teenagers at potential risk.