Over a week has passed and the dust has begun to settle, with the people involved starting the long and painful process of physical and emotional healing. Seeing and hearing the firsthand stories of trauma is truly gut-wrenching. My mind’s been racing over the course of the last few days as I have watched all the drama and its aftermath unfold.

No doubt, law enforcement, government, anti-terrorism and a host of other agency officials are sorting through all that’s happened to deconstruct responses so that they’re better equipped for prevention and intervention the next time around. That’s wise. . . very wise. While it may sound brash and insensitive, I believe it’s also important and wise for us to move outside of ourselves to look at ourselves with a critical eye, calling ourselves to task if what we see in our personal/corporate response indicates skewed understandings of faith and life. In other words, how we respond can be quite telling regarding who we are, where we get it wrong, where we get it right, and how we need to grow.

So, let me share some thoughts that are still unrefined and incomplete, but that I think are safe at this point to put out there. I’d love to know if you think I’m barking up the wrong tree, being too harsh, or simply stating things that you’ve observed as well. Here are some random thoughts post-Boston. . . .

First, we need to understand sin. Our post-Christian world is truly a world without an understanding of original sin and human depravity. Did you watch the interviews with the friends and family of Dzhokhar and Tamerlan Tsarnaev? Nobody but Uncle Ruslan was willing to believe that they were capable of, could, would, or did do such a thing. It seems that with any heinous act or crime committed these days, there are people close to the perpetrator who are in a constant and vocal state of denial and disbelief. Even when the evidence is clearly to the contrary or the perpetrator stands in court and confesses their guilt, there are family members and friends who can’t grasp it, won’t believe it, and who continue to trumpet denial. Sometimes, blood is thicker than water . . . and you can’t see through it to what is actually there. In this case, that extends from the perpetrators’ parents to the high school classmates of Dzhokhar. Did any of you watch Dzhokhar’s friends talk about who he was in high school? Did any of you see the many incidents where reporters asked Dzhokhar’s friends to turn to the camera and say something to him as he was on the run? Did you hear how those friends encouraged him to turn himself in and get on with life because he was a good guy, a good friend, and someone who has something yet to contribute to society? While some of those things might indeed be true (God is a God of miraculous redemption, after all), it is the underlying assumptions about human goodness that informed those remarks that just seemed rooted in obliviousness to reality. Without a good understanding of sin we have no understanding of the reality of the human condition, no foundation that can help us make sense of what happened and how it happened, and no need for the redemptive saving work of Christ. For me personally, I could only sit there and shake my head as friends and family spoke. Why? Not because I know Tamerlan and Dzhokhar, but because I know me.

Second, we struggle to understand tragedy and death. At a theological level, death is difficult for us all to deal with because we know we have moved beyond the flourishing and shalom of Eden into an existence filled with things that are not the way they are supposed to be. But in a world where we have lost our perspective because we have turned our backs on truth, we are left to flounder around and make sense of death on our own. I don’t remember spontaneous memorials at sites of tragedies when I was younger. I don’t remember seeing roadside memorials along the highway in years’ past. This is something relatively new, and I wonder if the newness flows from our efforts to grapple with a reality about which we’ve lost context. In addition, I’m trying to figure out how the Boston Marathon bombing (which, by the way, was horrific) warranted so much more attention than other horrifying tragedies, many which occurred last week as well. While a death toll of just one is indeed bad, a death toll of four somehow trumped all other mass deaths of greater magnitude. And why have so many Americans latched on to this cause as opposed to latching on to  other unjust causes/tragedies, with such an outpouring of grief and compassion. At the very least, I think one good thing that comes from the outpouring is the ability to say, “Yes, we can all agree that something is wrong with us and with our world.” 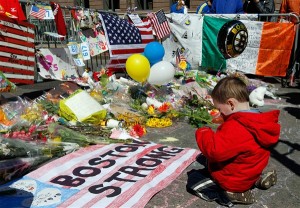 Third, I wonder if the “Boston Strong” movement has become the cause dujour that we feel we must buy in to. In other words, is it more about style and belonging, than it is about really, really caring? I know. It sounds so harsh to be asking that question about a legitimately timely and helpful cause. But we can’t deny that things like the yellow rubber Livestrong bracelets became for many a cultural fashion phenomena more than a representation of a heartfelt cause. Or what about the “Save the Tatas” or “Feel Your Boobies” decals and t-shirts? Sure, for many there is a sense of deep care, concern and allegiance to these causes. But as the marketing for these causes spread, the real deep meaning gets drained. It’s more about saying the right thing at the right time in order to be relevant and to belong. Here’s something related to watch tonight. Our Philadelphia Flyers have a hockey game against the Boston Bruins. There’s no love lost between these teams. There’s a good chance that there will be some fisticuffs before the final horn blows. But as the teams share the ice tonight the Flyers will be sporting patches and helmet decals in support of the City of Boston. . . a great gesture. Should we see any irony if those adornments are being worn during a combative on-ice fight?

Fourth, tragedy just might bring us out, more than it brings us together. All of us have been stopped in interstate highway traffic as cars come to a standstill because of an accident. That’s to be expected when the accident happens on our side of the highway. But have you ever noticed how traffic stops for accidents on the other side of the road thanks to the “gawker effect” and the “curiosity factor”? For whatever reason, we love train wrecks. We love to show up. We love to look. We love to stare. We love to tell others that we’ve been there. Could it be that we care more about being there, than we actually care?

Finally, our collective frontal lobe is failing.  A loss of a moral compass has combined with a host of other cultural factors. . . including the immediacy nurtured by social media. . . to create a world where we speak and broadcast way before we think. One of the biggest stories to come out of Boston is the way that social media was used to spread news. . . much of which was highly inaccurate. Columnist Michael Gerson touched on this in his piece, “Filling the silence after the sirens.” He writes, “The sense of helplessness that follows a tragedy is too much for us. So we fill the silence after the sirens with explanations. This is very human – until it becomes inhuman.” He points out the pitfalls of social media when he writes, “Twitter is not a medium that encourages reflection.” He’s right. In our seminars on adolescent development we regularly remind parents that the frontal lobe is not fully formed until about the age of 25 or 26. The frontal lobe is the part of the brain responsible for decision-making and impulse-control. We live in a day and age when more and more people are using communication tools to bypass their frontal lobes  and other filters to speak before they think. And when you’re competing with everyone else to stay in the social media game (or be “relevant”) by staking your claim in the information landscape as close to first one there as you can. . . well, the name of the game is speed more than it is truth, accuracy, or reflective depth. Proverbs 18:2 reminds us that “a fool finds no pleasure in understanding but delights in airing his own opinions.” If that’s true, what does that make us?