I’m a sucker for nostalgia. . . I’ll admit it. When my travels take me to places where I used to live, I will oftentimes go out of my way to visit a spot that holds a piece of my personal history and loads of memories. Included are old houses, old churches, parks, playgrounds, schools, and ball fields. Like the Beatles sang in 1965’s “All My Life,” “There are places I remember/All my life, though some have changed/Some forever not for better/Some have gone and some remain.” And I love to visit every one of them.

No matter how much or how little those places have changed, just seeing and standing on a spot brings up all kinds of memories and emotions for me. Sometimes I am moved to tears. That happened today as I stopped at a special place that’s simply a piece of blacktop on the side of a road. It’s right there in the picture where the curb and sidewalk now sit. 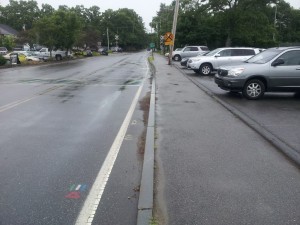 Thirty-one years ago next month I sat on the shoulder of this road in a beat-up old Chevy Monza with my wife of barely two months. It was raining. . . just like it was today. And we cried. And we prayed. We believed that God has called us to move to the North Shore of Boston so that I could begin the trek through seminary at Gordon-Conwell. We had traveled up several days before to find housing. Several frustrating days passed and we had found nothing affordable. At the end of our rope with all possibilities exhausted and no sense of what to do next, I pulled off of Route 1A in Hamilton, Massachusetts onto Asbury Street and a spot next to Patton Park. Confused, frustrated, and even a little bit angry, I cried. Lisa did too. In fact, “wept” is a better descriptor for what I was doing. And we prayed. We simply asked God to show us the way forward. Did he even want us at seminary? Then, we began the long and confusing drive back to Pennsylvania after having decided that with nothing else to do, we would go home and give it one last shot a few weeks later.

That spot on Asbury Street just off 1A is a special place that I remember. Sitting on that spot in the rain today, I thanked the sovereign God of the universe for keeping His hand on my life. Thirty-one years ago we sat there at his mercy. . . crying. A month later, we returned and within a few hours of our arrival, God had provided an affordable housing option that was better than anything we could have ever asked for or imagined. I attended Gordon-Conwell and was shaped by that education for the rest of my life.

As I sat in the rain on Asbury Street today, I prayed for a few friends who are facing difficult uncertainties in their lives. I know that some of them are praying through tears. I also know that the sovereign God of the universe has his hands on their lives.