Don’t you just love those “get smacked up side the head” moments? I had one this morning as a result of the convergence of Bible, book, and newspaper. It was a nexus that has given me such personal pause about myself and our culture that I thought I would pass it on. Perhaps you’ll find it personally challenging and helpful as well. 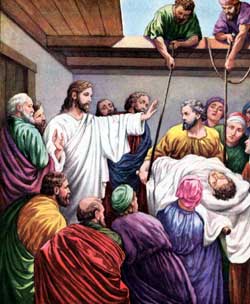 The Bible part was that familiar Sunday School story from Mark where Jesus heals the paralytic after he is lowered through the roof by his friends. I can still see the story played out on the flannel graph and countless take-home papers. What hit me hardest this morning was the skeptical push-back from the Scribes. So convinced of their rightness about all things religious, they wound up getting lost in their wrongness. When I was a kid I’d hear the story and think, “Idiots!” Now, I hear it and see my need to be more introspective. Is it possible that I’ve grown up to be the very idiot I once scorned?

The book is Arthur Boers’ Living in Focus: Choosing What Matters in an Age of Distractions. I’ve been working through it for a week. Boers offers a much-needed multi-faceted gut check regarding our carte blanche acceptance and adoption of technology without thought as to what it might be doing to us, and how to use it so that it doesn’t shape us in negative ways. Boers quotes Karissa Thacker, a management psychologist, who suggests that our growing reliance on electronic devices should prompt several telling questions: “Can you manage your need for control? Can you manage your need to be important? Can you manage your need to feel in the know?” Ouch! Working away for the last couple of years on our Digital Kids Initiative here at CPYU has me thinking about those questions on a regular basis. When I process my own fallen bent as well as the fallen leanings of our culture, I realize that our default setting is narcissism. . . . which makes the asking of those questions all the more necessary.

Finally, columnist David Brooks’ piece on “Religion and inequality” offered the knock-out punch. Brooks says that our culture used to be marked by competing status hierarchies that tended to keep things and people more balanced and healthy. For example, it wasn’t that long ago that people “were more likely to assume that jobs at the bottom of the status ladder were ennobling and that jobs at the top were morally perilous. That is to say, the moral status system was likely to be the inverse of the worldly status system. The working classes were self-controlled, while the rich and the professionals could get away with things.” Brooks sites the biblical roots of this type of system as God would use the weak and “unwise” to accomplish his work. One’s place in society was not determined by worldly accomplishments, but through an acceptance of God’s grace. In other words, people didn’t have to nor should they think they have to build themselves up, establish their brand, and market themselves. Brooks quotes theologian Paul Tillich: “Do not seek for anything; do not perform anything; do not intend anything. Simply accept the fact that you are accepted.” Brooks goes on to state that all the rival status hierarchies have disappeared, with the only one left being the hierarchy of professional success. . . which, by the way, has become more easily manufactured (creating the appearance of success by creating your successful self on social media) than earned.  Brooks concludes that we aren’t better off for it all.

Fact is, we might not know best what we need. We might not have it all figured out. And, our clawing, jockeying, positioning, and posting in pursuit of that successful image (or brand) might actually be the road to the death of our selves rather than the road to redemption.