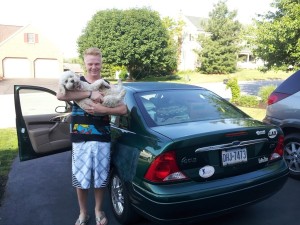 It’s been just about four weeks since our house emptied itself of children for the first time since 1983. There have been kids in this place for almost thirty years. We stood in the driveway with our youngest, Nate, as he climbed into a loaded Ford Focus and began the 10-hour drive north to the Muskoka Woods Sports Resort in Ontario. . . home to his summer job. The psychology of sending the 20-year-old “baby” of the family over the border into Canada on his own. . . without the required paperwork that should have arrived weeks before. . . was difficult. On the one hand, launching is necessary. On the other hand, we haven’t done this empty house thing for three decades.

Our house is now void of children until Nate returns at the end of the summer. Josh married Sheila three years ago. It’s been almost two years since Bethany got her own place. Caitlin and her new husband Rick are living in North Carolina. . . and are now expecting twins! Lisa and I are living together in a quiet that’s hard to recall. Yes, there is a dog and an inherited cat. But this is a new stage of life for us. And, it’s fun.

I was never really sure how I’d do with this. To be honest, I feared it and thought that the slow dragging pace of time would keep it at arm’s length for an eternity. But time has passed incredibly fast since those days when our kids were little and the thought of them leaving home to head off to college, to work, to marriage, to whatever might take them away. . . well, those thoughts were gut-wrenching. I couldn’t imagine them leaving without feeling some kind of deep grief. “How will I ever be able to let them go?” was a question that I pondered as I watched the parents of our graduating youth group kids say their “goodbyes” year after year after year.

As I was thinking about this during the days after Nate left for Canada, I ran across a wonderful little post from Leslie Leyland Fields. . . “Letting Go of Our Children and Killing the Sparrow.”  Leslie is the author of one of my two most favorite parenting books (Parenting is Your Highest Calling: And 8 Other Myths That Trap Us In Worry and Guilt), both of which we recommend here at CPYU. In her post, Leslie offers some of her heartfelt and conflicted thoughts regarding needing to let go and wanting to hold on. It’s good stuff.

If you’re the parent of a young child, I want to pass on a few observations that have stuck as my kids have been leaving the nest over the last three years.

First, leaving is what you’ve been parenting towards. We don’t own our kids. They are entrusted to us by God. We raise them to release them. We parent them from the dependence of childhood into the independence of adulthood. We need to keep the goal of their launch in mind from the moment we first hold them.

Second, we need to be aware that current parenting philosophies and practices discourage their launch. We over-parent. We hover. We helicopter parent. We bail them out. We do everything for them. We make sure they all get trophies. As a result, we’re raising a generation of indulgent and entitled kids. We’re creating a world of extended adolescents rather than a world of young adults. I know, this all sounds like an overstatement, but it’s largely true. Nurturing kids in child-centered families yields self-centered twenty-somethings who are less prone to launch. All this to say. . . if we hold on too tight without the aforementioned goal in mind, we’re not doing anyone any favors.

Third, it’s really not as difficult as you think or once believed. We’ve discovered that just as God wants to prepare our kids to launch into independent adulthood, God is also preparing us to launch them. Our fear that we will be begging “Please, please don’t go!” is eclipsed as they grow older with a “Please, please go!” realization that it really is time for them to be out on their own. Sure, it’s difficult, you miss them, you fear for them, and you want to be sure everything is going to be OK. But somehow, if we’ve done our job right, God gets us all ready for their departure.

And finally, our prayers must never end. There’s a little prayer I’ve been praying for my kids since they were little. It’s a supplication. . . a blessing of sorts. . . that I prayed for them whenever they’d leave the house and when they finally left the house: “Lord, protect and watch over ______. May your angels surround them. Front. Back. Above, Below. On each side.”

It’s going to happen. It should happen. It will happen. Remember, God is sovereign and in control.