Medical professionals and law enforcement agencies are sounding a warning to parents and educators regarding the growing popularity among teenagers and young adults of a form of the club-drug known as ecstasy. This new drug-threat is known as “Molly,” a slang term for “molecular,” which is a reference to drugs with altered molecular structures created by “street chemists” in a an effort to dodge illegality. 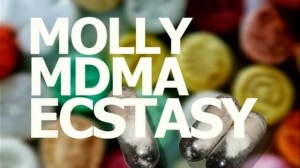 Molly is the pure crystalline powder and more intense form of the club-drug Ecstasy, a man-made synthetic mind-altering drug with hallucinogenic and amphetamine-like properties. The chemical name for Ecstasy is MDMA (short for 3,4-methylenedioxymethamphetamine). While MDMA in Ecstasy-form is typically mixed with other ingredients (caffeine, methamphetamine, PCP, cocaine), users are led to believe that MDMA in Molly-form is pure, however experts warn that the makers of Molly can add anything they want to the drug, thereby compromising its purity.
MDMA was first patented in 1914 by Merck and used as an appetite suppressant by soldiers during World War I. The drug was then tucked away until it was tested on animals as part of a series of CIA mind-control experiments in the 1950s. During the 1970s, therapists rediscovered MDMA and bean to use it as a “miracle drug” that would get patients to open up and release their emotions. Therapists touted MDMA’s benefits for patients who were depressed, anxious, suffering from Post-Traumatic Stress Disorder, or who were experiencing rape-related trauma. In June 1985, the DEA banned the drug’s manufacture, sale, and possession since it has no medicinal usefulness and a high potential for abuse. The DEA considers MDMA to be a Schedule 1 controlled substance, meaning that it has no accepted medical use and there is a high probability for abuse. In recent years, Ecstasy has become a centerpiece of the dance club, rave, and party scene. Now, Molly is finding its way into those places.
Once the drug (pill, powder, table, capsule at anywhere from $20 to $50 a dose) is swallowed, it takes roughly 15 minutes for the drug to enter the bloodstream and make it to the brain. Between 30 and 45 minutes after ingestion, users experience a three to six hour “high” that’s often referred to as “rolling.” The drug is particularly popular among teenagers and young adults as the effects include an increased feeling of happiness, a heightened sense of alterness and hyperactivity, increased sense of touch, a sense of loss of time, decreased inhibitions, impulsivity, empathy, emotional connectedness, and the ability to move and express oneself freely. Some users experience immediate negative effects, including anxiety, agitation, sweating, chills, and dizziness.
The DEA reports that the drug can be addictive to some users, and that it has numerous side effects. These side effects include confusion, depression and other mental health issues, anxiety, paranoia, sleep issues, drug cravings, muscle tension, involuntary teeth-clenching, cramps, uncontrolled body movements, racing heart, foaming at the mouth, nausea, and blurred vision. Molly (and other forms of MDMA) used in high doses (often called “bumping”) can play havoc on the body’s ability to regulate its temperature which can result in hypothermia. This, in turn, can lead to cardiovascular, liver, and kidney failure. While experts still don’t know if MDMA can cause long-term brain damage in humans, animal-studies showed that exposure to high doses of the drug produced brain damage that could still be seen seven years later.
Molly’s popularity has been fueled in recent months by the inclusion of references to the drug in pop music, including the music of Kanye West, Lil Wayne, Gucci Mane, Nicki Minaj, Rick Ross, and others. In her hit song “We Can’t Stop,” Miley Cyrus gives a nod to her affinity for the drug when she sings “We like to party, dancing with Molly.” Long-time music staple Madonna even asked the crowd at one her concerts, “”How many people in this crowd have seen Molly?”
In recent months, Molly has made the headlines due to an increased number of deaths attributed to overdoses on the drug. The Drug Abuse Warning Network reports that the number of MDMA-related emergency-room visits has doubled since 2004. As the drug continues to grow in popularity, it is reasonable to assume that these numbers will increase.
Parents can suspect their kids are abusing Molly, Ecstasy, or MDMA if they show any of these signs: clenching their jaw, a sudden loss of appetite, high or low body temperatures, sadness and depression, and an inability to get out of bed for an extended period of time. Parents should err on the side of caution and seek medical help. In addition, if you find any drugs or drug paraphernalia intervention is necessary. In the case of Molly, it appears as a white or off-white powder, or in pill-form. Pills are often imprinted with logos, symbols, or letters.
As always, we recommend that you make your kids aware of the dangers (physical, moral, spiritual, legal), risks, and consequences of illicit drug use.
For a FREE downloadable pdf handout of this CPYU Trend Alert on Molly, click here.