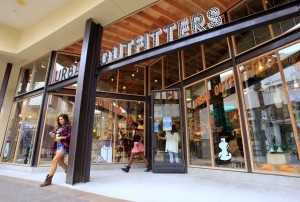 The retailer known as Urban Outfitters doesn’t have a store near our home in Lancaster, Pennsylvania, but they’ve been in the news lately as they are getting ready to build a brand new and very large distribution center in nearby Gap, PA. I’ve followed the news a bit as local folks have been excited about the project for the reason that it will provide tax revenue and create jobs. I think it would be fair to say that local support has been driven by economic factors. Because of economics, Urban Outfitters’ arrival is being seen as a “good” thing for our community.

When the news first broke several weeks ago, my mind went immediately to what I know about Urban Outfitters as a culture. . . the store, the stock, and the ideas promoted through products that include much more than garments.

I first set foot in an Urban Outfitters store several years ago. On an out-of-state trip, I remember looking through the store’s window on a crowded Friday night and then walking in. It oozed the “cool factor” with all kinds of little knick-knacks, books, and even some gags that I thought were pretty creative and funny. I was drawn by the retro feel. The place was packed and most of the clientele was young. . . middle school, high school, and college-age kids. It was a unique retail experience. . . so much so that I told my wife about the place when I got home.

Last year I went into the Urban Outfitters store at Baltimore’s Inner Harbor. We were down there with our CPYU staff. While my wife was drawn to some inexpensive sweaters upstairs, I hung out downstairs with all the other stuff. The more I dug around, the more discouraged I became. It was an ethnographic exercise of sorts for me that would reveal to even the most objective of observers that our culture really has no boundaries or standards when it comes to sexuality and substance abuse. In particular, many of the books made assumptions about what both customers were looking for and what customers should believe. . . along with how those beliefs should inform behavior (For example,  The Little Green Book of Weed and The Position of the Day Playbook: Sex Everyday In Every Way).

You see, ideas do matter. And what Urban Outfitter’s inventory sells are ideas that inform both belief and behavior, especially for the impressionable young consumers who make up their market segment. In effect, Urban Outfitters not only sells garments, but they sell a worldview.

Last weekend, I was in San Diego for the National Youth Workers Convention. I took a walk over to the crowded Fashion Valley shopping mall. It’s a trendy place that’s always buzzing. When I spotted the Urban Outfitters store I decided to wander over. I had just read a story trumpeting the positive local response to the economic impact of the distribution center in the online version of our Lancaster newspaper. . . so, Urban Outfitters was fresh on my mind. I was drawn into the store both by the colorful portable record players in the window and curiosity about the kinds of ideas that Urban Outfitters is peddling these days. 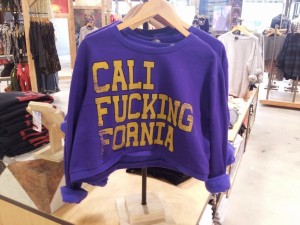 When I glanced through the window past the shelf full of those snappy little record players, I spotted a shirt that represents much of what Urban Outfitters and other retailers distribute to young consumers these days. . . consumers who they think want and need this stuff. I went in and shot a picture of the shirt and have posted it here. The shirt was hanging in two places right there in the center of the store, making it visible from virtually all directions. What struck me is how funny I felt snapping that picture. I felt funny because I was the only one who seemed to notice how loudly that shirt shouted. . . and the particular message it was shouting. I don’t say that in a self-righteous or noble manner. Rather, I say it as a way of noticing just how much our collective cultural standards have changed in a very short period of time. This shirt – like all cultural artifacts – is both a map and a mirror. It maps out life for our kids and mirrors back the realities of who we’ve chosen to become, what we’ve chosen to believe, and the standards that we’ve chosen to live by.

I wonder too, about how we tend to make decisions (both individually and communally) and how we judge the wisdom of those decisions based more on economics and financial growth as opposed to best practices, ethics, and the distribution of ideas. I wonder if history will tell the story of our culture as one that lost its soul in an effort to build its portfolio. And while Urban Outfitters and a host of other retailers sell more than just products, we need to be tuned in to how those ideas matter and the ways that they shape us.