There were four of us at our table, and four at the table next to us. It was a beautiful waterfront restaurant that was the perfect setting for good conversation. . . and we had it! But the young family of four sitting next to us had made choices that were keeping them out of the conversation loop. In Sherry Turkle’s words, they were “alone together.”

There they were. . . almost knee to knee around the small round table. But each member of the family was “absent” from the other as they all focused their attention on separate screens. For mom, dad, and the the oldest daughter (maybe 8 or 9?), it was their smart phones. For the youngest daughter (all of 3 or 4-years-old), it was a tablet propped up on its pink cover just inches from her face at eye level. A large set of pink headphones covered her ears for the duration of the meal as she focused her eyes on the animated movie playing on the screen. She ate her food in a trance-like state. In the immediacy of the moment, those screens were keeping them far, far apart from each other. Who knows what the long-term effects might be. 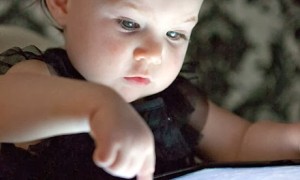 This scenario is playing out more and more in our culture as technology advances and we find ourselves purchasing and living with more and more tools. It’s been about 50 years since Marshall McCluhan said that “we shape our tools and afterwards our tools shape us.” There’s shaping going on right under our noses. . . literally. . . and for the most part, we aren’t at all aware that it’s happening. Nor do we know what it’s doing to us and our kids. Only time will tell. And when time does tell, we’ll most likely be starting our laments with these words. . . “If I had only known. . . .”

Yesterday, the American Academy of Pediatrics issued this release regarding children and screen time: “Managing Media: We Need A Plan.” This follows up a very direct and stern warning regarding the need to not just limit, but keep all children under the age of two away from any and all media screens in an effort to promote healthy development in all spheres of life. It’s also a good idea that parents who are holding, playing with, or interacting with their kids should keep away from the screens as well.

We live in a media-saturated world. Consider these facts from yesterday’s press release: Excessive media use has been associated with obesity, lack of sleep, school problems, aggression and other behavior issues. A recent study shows that the average 8- to 10-year-old spends nearly 8 hours a day with different media, and older children and teens spend more than 11 hours per day. Kids who have a TV in their bedroom spend more time with media. About 75 percent of 12- to 17-year-olds own cell phones, and nearly all teenagers use text messaging.

Ironically, I heard about yesterday’s report from the AAP hours after listening to a news report about how Disney – those masters of marketing to kids (and parents) – is leveraging our willingness to put our kids in front of screens and screens in our kids hands almost 24/7 by releasing the first nine episodes of their new animated series for pre-schoolers, “Sheriff Callie’s Wild West,” exclusively on a tablet app. It’s a brilliant move. But is it a safe move?

This is one of those times where parents need to step out of the fast-moving flow that “everyone else” is “doing” to pause, take a deep breath, think, and then make a wise decision that’s nothing less than counter-cultural.

That point was driven home a bit more last night as I listened to an NPR interview with some mothers of toddlers who were bragging up the smarts of their twelve and eighteen-month-old little children who could manipulate touch screens better than they could walk.

To learn more about electronic addiction, check out our Free pdf download: “A Parents’ Primer On Electronic Addiction.”