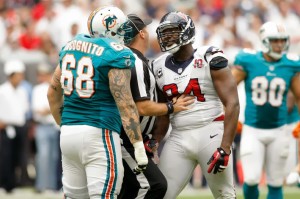 Unless you’ve been living under a rock, you’ve no doubt heard about the mounting tension in the NFL regarding what’s happened with Miami Dolphin offensive lineman Richie Incognito, and what needs to be done about it. In a nutshell, Incognito’s long-standing reputation as a bully and perhaps the NFL’s dirtiest player (an actual award he won in 2009) has caught up with him thanks to allegations that he has harassed teammate Jonathan Martin. The story continues to unfold this week with Martin leaving the team to seek counseling, and the Dolphins suspending Incognito for engaging in conduct detrimental to the team.

While none of us actually knows what happened between the two and where this story will end, one thing is sure: Richie Incognito has what many are calling a well-deserved reputation. In fact, in an interview on this morning’s Today Show, the highly-respected Tony Dungy clearly stated that when he had the opportunity to draft Incognito several years ago, he didn’t even consider the option. For Dungy, Incognito was someone whose presence, personality, and influence would be unwanted in his team’s locker room.

Visit NBCNews.com for breaking news, world news, and news about the economy

Learning more about this story and hearing Dungy’s remarks earlier this morning has gotten me thinking about what the Incognito affair reveals about our contemporary culture. . . who we are, what we believe, and how those beliefs inform and shape our behavior. It’s gotten me thinking about the ways in which sport (at all levels), the way we play, and the way we spectate are a clear window into our individual and collective souls.

In one sense, it’s easy to see Incognito as a perpetrator of sordid behavior. . . everything from  poor sportsmanship, to cheating, to bullying and intimidation. Yes, he is (like all of us) responsible for his behavior. But what kind of family, community, and society nurtures and normalizes that kind of behavior? One recent article in USA Today quotes Incognito’s dad as telling a sixth-grade Richie, “If you let anyone give you (expletive), you’re going to take (expletive) your entire life.” Growing up in a family and culture that thinks and lives that way can certainly create what sociologists call a state of “anomie,” or normlessness. It might be that Richie Incognito is just one example of both cause and effect when it comes to our moral schizophrenia.

Last evening I had the opportunity to speak on kids and technology at a local school district at their Internet Safety Expo. Teachers and administrators were disappointed by the turnout- a sign that people just don’t see this topic as something that’s important. One teacher came to me afterwards and lamented the fact that most of today’s parents would find my suggestions regarding online boundaries for younger children and the need to push back at kids with a clear “no” every now and then to be antiquated (for example, not giving young children smart phones with 24/7 Internet access). She told me, “I may agree with you, but most young parents today don’t and won’t.” That’s more evidence that we live in the kind of culture that spawns and hothouses values, attitudes, and behaviors like Richie Icognito’s. (Another recent example is the Oregon middle school football coach who sees no problem with taking his team to Hooters. . . which I blogged on a couple of days ago.)

Back in 1991 Thomas Lickona published his book, Educating for Character: How Our Schools Can Teach Respect and Responsibility.  At the time, Lickona’s book was descriptive, predictive, and prescriptive. The first words of Chapter 1 are a quote from Teddy Roosevelt: “To educate a person in mind and not in morals is to educate a menace to society.” Lickona wrote that if things were to continue as they were in terms of morals and character formation, our culture would face a dim future as we moved into the 21st century. At the time, Lickona listed these ten indicators that we are failing as a society to provide for the moral development of the young:

Welcome to the 21st century. You’d be hard-pressed to state a case that any of these ten indicators have shown improvement rather than further decline. This all points to the fact that if we are going to see change, our prayers for a shift will require the additional efforts of deep individual and corporate introspection, a clear understanding of right and wrong, and a deep commitment to change course so that our kids wind up integrating a biblically faithful and God-glorifying character ethic into every nook and cranny of their lives. It’s a tall order, but one that’s necessary and worth pursuing.