What in the world is happening with Tony Dungy?!? That’s what I wondered when I logged on to my smart phone to check the news the other day. I’m on vacation. . . a vacation that includes no television (it’s been awesome!) and very little time on the Internet (double-awesome!). So the couple-of-days-after-Monday’s-Tampa Tribune article left me with only bits and pieces of what’s going on in response to Dungy’s straightforward and honest response to a reporter’s straightforward question about whether or not Dungy would have drafted Michael Sam. 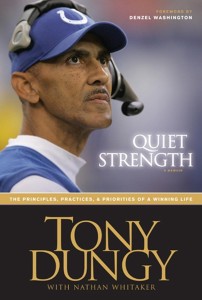 First, Tony Dungy is a man of deep, deep integrity. I have often pointed to Dungy as model of humility, compassion, and integrity in both life and sport. I have met and talked with Tony Dungy. He’s the real deal. When you talk to him, his eyes are locked on your eyes. . . an indicator that he’s locked on you as well. I have two books titled Quiet Strength on my shelf. . . right next to each other. Both are autographed, I’ve met both authors, and I have the highest respect for each. One is by Rosa Parks. The other by Dungy. The title applies to both of these individuals. But both also know their frailty and weaknesses. Neither one would self-righteously call themselves perfect or without flaws. That, I believe, is what makes a human being admirable. I don’t think Dungy is a perfect man. There’s no way. But I do think he is incredibly thoughtful, loving, and committed to integrity. Dungy himself would be the first to say he is a sinner saved by grace. Keith Olbermann. . . you have no idea. . . but you are generating ratings. Mr. Olbermann, are you really willing to jettison a man’s life testimony, work, and reputation on the basis of something you think he said and meant? Dangerous. We should all know better. Listen to Tony Dungy in the context of who Tony Dungy has always been.

Second, there is no way that Tony Dungy is a homophobe. Sadly, that label gets thrown around and misused in horrible ways. I would be the first to say that there are those who label themselves “Christian” who do not show the love of Christ towards the same-sex attracted. Perhaps they are worthy of that label.  But I also know that there are many followers of Christ who are working, praying, talking, and studying hard in an effort to faithfully and obediently follow Jesus in their relationships with the same-sex attracted. I would bet my life that Tony Dungy is one of those guys.

Third, the response to Dungy’s honest and straightforward answer offers a peek behind the curtain of what has come and is to come in our culture. When I read Dungy’s statement, it made full sense to me. He wouldn’t have wanted the circus of distractions to steal focus from his team. I get it. The media circus will pitch its tent somewhere because it has to perform, sell tickets, and fill seats. The media response to Dungy’s comments serve as “exhibit A” to that fact. Now, we live in a world where our words get mis-read, mis-exegeted, and horribly parsed. As listeners and observers, we need to be careful not to put thoughts in people’s heads, bents in their hearts, words in their mouths, and meanings into those words that were never there in the first place. That directive goes to both the extreme left, the extreme right (yes Christian brothers and sisters. . . we’ve been horribly irresponsible), and everyone in-between who claims to know better than the source what it is that the source really said and meant. And, if we are to be smart, we should be processing all this stuff through the Scriptures rather than the screen.