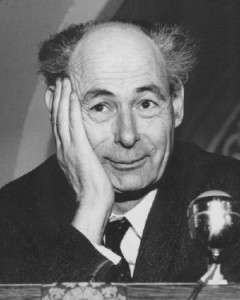 The other day I discovered a large bank of full bookshelves at the back corner of an indoor flea market. They were a running a special. . . ten books for ten bucks! Dangerous for me. I walked out with some great old stuff, including a copy of Paul Tournier’s 1963  book, The Adventure of Living. Tournier was a swiss psychologist who wrote many fascinating books bringing together Christian faith and the social sciences.

I’m only a few chapters in, but Tournier is addressing the timeless problem of broken humanity: our desire to be fulfilled and our endless dead-end pursuit to fulfill ourselves with all the wrong things. Ultimately, the greatest adventure that finally fulfills is to be filled with Christ. He addresses a variety of dead-ends, including the pursuit of entertainment, extra-marital affairs, and parents who identify themselves with their children in the pathetic hope of realizing the dream they themselves missed.

Early on in the book, Tournier writes these words: “The thing one possesses always seems less attractive than the thing one has desired. The excitement of desire has lent magic coloring to the coveted object, but almost as soon as it has been obtained it loses its brilliance. The adventure lay in the desire and hope, not in possession”

This is the truth behind the old cliche, “The grass is always greener on the other side.” It is the reality that drives promiscuity, affairs, job-hopping, materialism, accumulation of stuff, covetousness, and so much of our moving to bigger and better places. But the reality is that the yearning will only continue. . . until God.

Not coincidentally, as I’ve been sitting here in a lakeside coffee shop banging out this blog, the classic rock station on the speakers has played two old songs that speak to this reality. Songwriters are the philosophers of the day, are they not? First, Loverboy’s 1981 “Everybody’s Working For The Weekend” (Everybody’s working for the weekend/Everybody wants a new romance/Everybody’s going off the deep end/Everybody needs a second chance, oh). Then, there’s Hall and Oates’ hauntingly true 1984 tune “Possession Obsession” (You know there’s something you need/Right here and now/To fill the space inside of yourself/Money love or power/When you want to have the number one first run anyone/You’re crazy ’til you own them/You ought to know better than that/The more that you buy the less you get back/It’s a case of possession obsession/Gimme Gimme).

“I have come that you might have life. . . and have it abundantly.” Jesus said it. Jesus is the only one who can deliver it. No matter how long we long, grasp, and grapple. . . nothing will ever fill us. Only Jesus.