Baseball superstar Alex Rodriguez was suspended for an entire year for using them. Cyclist Lance Armstrong had to forfeit seven Tour de France titles for the same reason. And now, countless kids are following suit and dancing with danger by using them in an effort to get ahead. We’re talking about performance enhancing substances, drugs, and procedures that include everything from blood doping to steroids to one of the latest and most dangerous substance abuse trends in youth culture. . . human growth hormone (HGH).

New research from the Partnership for Drug-Free Kids (drugfree.org) has found that among teenagers in grades 9-12, there has been a doubling of the reported lifetime use of synthetic HGH, from five percent in 2012 to 11 percent in 2013.  The research indicates that African-American and Hispanic teens are more likely to report the use of synthetic HGH, at rates of 15 percent and 13 percent respectively. The survey found that 9 percent of Caucasian teens have used synthetic HGH. Overall, 12 percent of the male teen population and 9 percent of the female teen population report use.

This dramatic jump in use should serve as a wake-up call to parents, educators, and youth workers as we endeavor to provide a unified front to protect our vulnerable and impressionable kids from harm, while providing for their well-being. What do we need to know about synthetic HGH and its use by teenagers, and how should we respond? 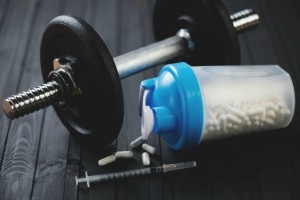 Human growth hormone is produced naturally by our bodies to stimulate cell production and physical growth in children and teens. Produced by the pituitary gland in the brain, HGH regulates body composition, body fluids, bone development, muscle/cartilage growth, and the metabolism of fats and sugars. . . all things that are very important and in need of balance for healthy development from childhood to adulthood.  In 1985, the FDA approved the use of newly developed and legitimately produced/regulated synthetic prescription HGH by pharmaceutical companies to legally treat a variety of medical issues, syndromes, and diseases in children and adults.

In recent years a large, growing, and unregulated over-the-counter and through-the-internet synthetic HGH business has been answering a growing demand among teenagers and adults looking to improve their athletic performance and/or outward appearance. A quick search of the internet yields thousands of online outlets for this unregulated and inexpensive version of HGH, usually in pill, capsule, or spray form. Sadly, these outlets are primarily concerned with meeting consumer demand and making money, while never talking about the dangers associated with synthetic HGH use.

There are several reasons why our kids are increasingly drawn to using synthetic HGH.

First, there’s the mounting pressure to perform athletically. Coaches and parents contribute to this pressure in a youth sports environment that places a premium on early development, specialization, winning-at-all-costs, getting ahead of the competition in order to secure a scholarship, and making parents who live vicariously through their kids feel better about themselves. Kids are feeling the pressure to be bigger, faster, and better. Anything that can give an edge is worthy of their time and attention. Synthetic HGH is perceived as an avenue to getting this edge. In some cases, not only are kids looking to get the athletic edge, but success-obsessed parents and coaches are actually suggesting its use.

Second, there’s our culture’s obsession with body-image. In an effort to achieve the perfect body, to develop the six-pack abs, and to lose weight to fit into the right-sized clothes, kids will turn to synthetic HGH, perceiving it to be a quick and easy fix. Synthetic HGH is being used for aesthetic reasons.

Fourth, synthetic HGH is easy to obtain. Unlike other illicit drugs, it can be purchased through e-commerce or even a trip to the local neighborhood vitamin store.

Fifth, children and teens are by nature at a point developmentally where they feel invulnerable. In other words, for those kids who do hear about the warnings and dangers related to synthetic HGH, they believe they are impervious to any of those effects. In other words, “That might happen to other people, but it will never happen to me.”

Finally, there is increased societal acceptance for the use of synthetic HGH or any other avenue available to achieve better appearance or increased athletic success. In a culture where the ends are what count, any means to those ends are legitimate. Cost is rarely, if ever, counted.

What can parents, youth workers, and educators do to stem the continued rise of this dangerous practice?

First, we suggest that you address the heart issues that are at the root of the use of synthetic HGH. We need to help parents, coaches, and kids see that the pursuit and worship of athletic success has crossed over into the realm of idolatry in today’s culture. While athletics and play are certainly a legitimate arena for exercising one’s gifts and abilities to the glory of God, we can easily slip into a win-at-all-costs attitude and the prioritizing of one’s athletic development over and above one’s spiritual development. In addition, we need to help parents and their kids see how easy it is to get swept up into prioritizing body image over and above the development of inward character and beauty.

Second, we need to help parents and their children think Christianly and critically about media and advertising portrayals that sell a worldview which prioritizes outward appearance and/or athletic success. In other words, we need to teach them to consciously manage their media, rather than mindlessly allowing their media to shape how they think about athletics, appearance, and all of life. They must learn to discern truth from error.

Third, we need to educate parents and teens about the very real dangers and risks associated with the use of synthetic HGH. Physical dangers include damage to the heart/heart disease, diabetes, swelling, elevated cholesterol levels, carpal tunnel syndrome, numbness of the skin, and cancer. Side effects also include nerve, joint, or muscle pain. The drug can also, strangely, result in long-term stunted growth. Experts also warn about “Acromegaly” as a result of overdose. This condition causes a person’s face and/or hands to grow to large, abnormal proportions. Synthetic HGH, like steroids, can increase a user’s aggression, a condition also known as “roid rage.” The fact that synthetic HGH is unregulated, untested, and readily available over-the-counter or through the internet should raise our level of concern.

Finally, we suggest that parents, youth workers, and educators emphasize to teens the need for careful care and stewardship of their God-given bodies. Tending to one’s physical body should not aim to result in conformity to cultural image or performance standards, especially when such conformity may result in taking measures that endanger one’s physical health. Instead, we need to carefully consider the liabilities and benefits related to anything that is ingested.

Warn the kids you know and love about the dangers and risks associated with synthetic HGH. And where intervention or medical help is warranted, don’t delay in taking responsibility for getting them the care they need.