When we teach our kids to think. . . and specifically to think critically and Christianly. . . it’s an awesome thing. It’s the right thing. It doesn’t happen enough. Over the course of the last twenty years I’ve had the opportunity to visit the Whitinsville Christian School in picturesque Whitinsville, Massachusetts on several occasions. Each time, I’ve spent a couple days in middle and high school classrooms talking about things like music, media, and marketing. I’ve always been impressed with the willingness of this school community to equip kids to engage the culture to the glory of God. Teachers, staff, parents. . . they are a community that really gets it, models it, and makes sure it happens.

This last week, I spent two days on the WCS campus. We began the day with early morning high school and middle school chapels. On Tuesday morning, I talked with the students about engaging critically and Christianly with social media and technology. On Wednesday morning, we tackled the difficult and pervasive challenge of pornography. Then throughout the day, I went from class to class engaging with students about advertising and the role it plays in our lives. We talked about what it is, how it works, and how to respond to the glory of God. With the average American seeing thousands of marketing messages a day (some estimates put that number as high as 7500 ads daily), doesn’t it make sense that we learn how to actively apply our faith to this square inch/nook and cranny of life? 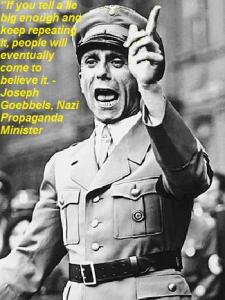 I told the students that since we’ve all been swimming in the marketing soup for so long, we don’t even realize it when we’re being marketed to. I showed them all kinds of examples of ambient advertising. Then, I told them about my quest to understand how a Christianized country like Germany (the country of my ancestry) could so easily be manipulated by Hitler into thinking that the Nazi agenda of hate was right. An entire country with the exception of a small resistance movement bought into Hitler’s program of genocide. The answer, I believe, was one of the most sinister yet effective marketing plans of all time. Engineered by Hitler’s Minister of Propaganda, Joseph Goebbels, the plan worked.

There’s a quote from Goebbels that I share with students whenever I talk about advertising. It’s worth passing on to the kids you know and love. Goebbels said, “This is the secret of propaganda: Those who are to be persuaded by it should be completely immersed in the ideas of the propaganda, without ever noticing that they are being immersed in it.”

That’s one more reason to be bathing ourselves daily in the truth’s of God’s Word.