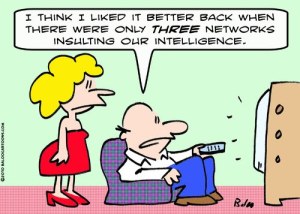 I did a little thinking out loud about this last night on Facebook. Here’s what I wrote. . . quoting some troubling insight from media critic Neil Postman: “All kinds of crazy stuff happening in the world and it seems like 90 percent of what I see on TV is about a celebrity wedding in Venice. Really? Got me thinking about these words from Neil Postman: ‘We do not measure a culture by its output of undisguised trivialities but by what it claims as significant.’ Makes me wonder. . . could we be toast?”

Some of the responses from friends were thoughtful and spot on. . .

“We’ve gone a long way down the wrong road as a society. All the more reason for Christians to be deliberate in our Faith.”

“Someone in Hollywood actually got married? THAT is big news. (We turned off our TV in 1992 so I have no idea who I supposed to be impressed with).”

“I cruise with Australian friends every February. They we’re genuinely surprised that we don’t all misbehave like Justin Bieber and others that you see you on Big Brother and the bachelor and Jersey shore.”

“How about four complete pages of the newspaper dedicated to Penn State game. That is more than the entire section on Faith and Values.”

” A culture of entertainment I’m afraid. Worse yet, it even spills over into churches.”

“Burnt toast. That’s why we need the Savior!”