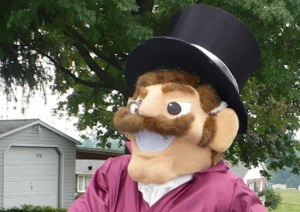 Earlier this week, a story broke about two senior football players – both starters – who were removed from the team for “defacing school property” while in the locker room prior to the team’s October 17th game. It seems that the school mascot costume – a baron – was sitting nearby in the locker room as the team was getting dressed for the game. One of the players, who was in between taking off his street clothes and putting on his uniform, put on the mascot’s head. Another player snapped a picture with his smart phone, and then posted it on Snapchat. While the player was naked in the picture, he did have his genital area covered.

As a grown man who works with teens and who was once a teenage boy himself, it’s not at all difficult for me to imagine how a group of guys caught up in the moment while getting dressed for a game would and could very quickly create this scenario. And the more I learn about the development of the teenage brain, it’s not only easy to imagine how something like this could happen, but it also explains a lot of what took place in my own life during my adolescent years. This, of course, does not make what happened in Manheim “right.”

What is markedly different about today’s world  and the world of my own adolescence are the borders and boundaries that require a teenager’s attention and consideration. In this case, the boys broke “The Baron Code,” a behavioral document that all athletes at the school sign and agree to follow. They also engaged in this behavior in a cultural climate that requires schools and their athletic teams to be especially diligent in holding to the highest standards of conduct. And finally, this happened in a day and age where cameras are present to document our every move, both with and without our knowledge. Then, when an image is captured, it isn’t limited to a postage-stamp-sized negative and one 4×6 print. Any image can be spread worldwide via social media in a matter of seconds. . . and then remain there forever.

Our local community is involved in somewhat of a debate over whether or not the punishment doled out by the Manheim Central School District fits “the crime.” For me to have an opinion one way or the other without knowing everything that happened would be risky. What I do know is that this story (along with countless others like it that hit the news almost daily) should serve to spark some serious conversations with our teenage kids about decision-making, impulsivity, and the responsible use of social media.

Simply stated, I would consistently remind kids of the following:

1. By nature and age, you are wired up to err on the side of impulsivity. Because of that, always endeavor to stop, pause, and think before acting.

3. Never forget that you have been made to glorify God. This is the reality that should drive what you do with every second and square inch of your life more than any other! Every time you make a choice, you are choosing sides.

4. Never forget that you live in a social media saturated world. What you think you are doing privately might be seen by the entire world. . . now and forever.

6. Pause and ask these questions before posting things on social media. . .

-Is this useful to others?

-Does it promote/reflect Kingdom living?