We love them, don’t we? We love them so much that broadcasters indulge us with replay loops of hard hits, whether it be in football, hockey, or any other contact and even non-contact sport. Truth be told, we love them so much that our kids now see emulating the hard hits of their grown-up heroes as somehow heroic. And when it’s our kid who levels the hit, we applaud. When it’s our kid who takes the hit and winds up stumbling a bit, we brush it off with a quick “get back in there!”

Hey, to be honest, there’s something about the violence of sport that we like, isn’t there? Just last night over dinner in Canada, my new friend told me about the small town he is from in Saskatchewan. When I asked about any famous hockey players who might be from the town, he quickly answered, “Dave Schultz.” I grinned a little. Yep, “The Hammer” and his on-ice hits (cheap or not) garnered my cheers as I rooted for my beloved Philadelphia Flyers (aka “Broad Street Bullies”) and their Stanley Cup teams of the mid-1970s back in my own teenage years. 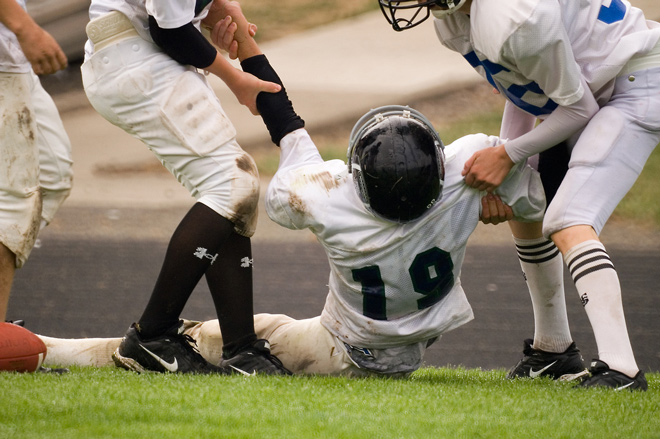 But there’s a fast-growing body of research and evidence about traumatic brain injury that should be catching our attention, especially if we are concerned about the health and well-being of our kids. I’ve actually been interested in the science of blows to the head since a day back in the mid-70s when I was passing time in the periodical section of my college library. While scanning the racks, I happened upon a journal (one that I would normally not pick up and read) that advertised some research on the effect of boxing on boxer’s brains. I’m not sure if it was my fascination, at the time, with boxing, or the fact that there were photos comparing the brains of boxers with the brains of non-boxers. What I remember was the article’s mention of “boxer’s brain,” and how the photo’s showed abnormally enlarged cavities in the dissected brains of boxers who had taken thousands upon thousands of blows to the head. It was so stunning that it has stuck with me to this day.

Whoever conducted that research some forty-years ago was definitely on to something. What was once called “punch-drunk” is now understood as TBI (Traumatic Brain Injury). And we now also know about things like “Second Impact Syndrome” (especially prevalent in athletes ages 12-18, potentially deadly, and caused when an athlete receives a secondary head trauma before the damage from a first concussion has been resolved), “Fronto-Temporal Dementia” (damage to the frontal lobe caused by concussions, increasingly diagnosed among older, retired football players), “Mild Cognitive Impairment” (a precursor to Alzheimer’s Disease, increasingly diagnosed among older/retired athletes who suffered multiple concussions), and “Chronic Traumatic Encephalopathy” (the kind of structural damage that I read about in that journal back in college,  and the cause of a variety of types of cognitive and psychological decline). This is serious stuff.

Why blog about this topic today? Well, yesterday I spent my day on airplanes. I read an eye-opening and amazing book, Head Games: How Much of You Are You Willing To Lose For a Game, by Christopher Nowinski. In his 36-short years, Nowinski has had quite an interesting life. He played football at Harvard University. He went from there to a short career in professional wrestling in the WWE, a promising career that ended with a severe case of post-concussion-syndrome. It was that blow to the head that led Nowinski to become a crusader for sports-reform in terms of safety, from the pee-wee level all the way up to the NFL and NHL.

Today, Nowinski is active in leading the non-profit Sports Legacy Institute at the Boston University School of Medicine. In addition, Nowinski is leading a strong, well-researched, and balanced effort to inform players, coaches, and parents, while also reforming safety standards and protocols as they relate to concussions. The Sports Legacy Institute’s website is a goldmine of information, that all parents and coaches of young athletes should be checking out.

Coincidentally, I picked up two Canadian papers to read this morning in my hotel. The first, The Saskatoon Star Phoenix, included an AP article with the headline, “Youth football linked to ‘cognitive difficulties’ in NFLers.” You can read Jimmy Golen’s article here. I also read a first-person account of a brain-injury and concussion by Christina Lucky in today’s Globe and Mail, “Through a glass head, darkly,” in which Lucky talks about a post-concussive experience of her brain no longer feeling like her home. Sadly, Nowinski’s own experience and those of a growing number of documented post-concussive stories (youth athletes and former pro athletes alike) are offering insight into just how cavalier, ignorant, and foolish our cheers of “nice hit!” and “brush it off, get back in there” really are. In effect, we’re killing our kids. Again, a blow to the head is serious stuff and we typically have not taken seriously.

All this has left me thinking about my own parenting. With four kids who played sports, we had our share of concussions to deal with. There were football hits, lacrosse hits, and field hockey balls taken to the head. On the one hand, we did hold our kids out of some contact sports until they were older for a variety of reasons, safety being one. But I think we may have been more diligent, mindful, and careful when it came to how the post-concussion experience was handled. My concern is also fueled by having a daughter-in-law who is a high school athletic trainer. We’ve chatted a little bit about new protocols and the expected push-back from parents/coaches who want their kids back on the field.

As a Christian, there’s quite a bit that should drive our concerns here. I believe it’s time for us rethink how we parent, how we play, and how we spectate as this body of knowledge grows. Our rapidly growing understanding of the brain and how it develops should feed our concern and care. We are stewards of our God-given bodies. And, as parents, we are stewards of the bodies of our children. We need to protect them from harm, from poor decisions, and even from themselves and their misguided desires (“I’m ok. Let me go back in the game.”). I’m going to be processing this more in coming days.

In the meantime, I want to recommend Christopher Nowinski’s book and the valuable work of the Sports Legacy Institute. I love this challenge from Christopher Nowinski: “How do we reform sports to a point where we can be confident that children will only walk away from sports with the positive lessons sports teach, and not with permanent brain damage or disease?”