Culture is a map and a mirror. It is both directive and reflective. As a map, it tells us what to believe and how to behave. As a mirror, it tells us what we already believe and how those beliefs shape how we already behave. And perhaps the most powerful maps and mirrors are those where our culture collectively gathers en masse to celebrate someone or something. Maybe the Super Bowl has become that annual biggest and most powerful map and mirror.

If that’s the case, then we need to do more than just mindlessly watch and cheer. We need to engage. To view with an eye and ear looking to uncover what the Germans call “zeitgeist,” or the spirit of the times. While watching last night’s game, I came away with these few initial observations about beliefs, behaviors, and what we’re modeling for our kids.

On a positive note, I loved the “Dad” theme that ran through a handful of commercials. I was pleasantly surprised by Dove’s take on fatherhood. Then, both Nissan and Toyota followed suit. The fact that we live in a culture where fatherhood advocates have been actively trumpeting the need for father-responsibility and involvement. . . well, this seems to indicate that the need still exists and that marketers are using that need to sell both product and a worldview that promotes father-involvement. That’s good.

On a related note, Al Michael’s quite-telling message and matter-of-fact tone regarding the fact that Sherman’s girlfriend is due to give birth any day now is reflective of larger trends in our culture regarding love, sex, and marriage, and the fact that these emerging attitudes have already emerged and are now commonplace. While Sherman should be lauded for his charitable work on behalf of children, we also know that it is best for a child to have a dad who is married to that child’s mother. And, we because of God’s grand order and design, it should come as no surprise that this is what’s best and right for a child. Did anybody blink when Michaels made his remarks? If not, then we’ve lost our sense of “best.” 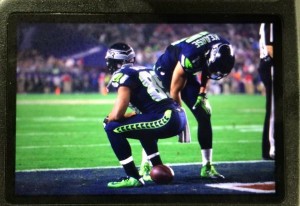 Our kids got a vivid lesson on how to celebrate after you score when Doug Baldwin celebrated by “mooning” fans near the endzone, and then acting like he pooped the touchdown ball. Perhaps Roger Goodell can send a message to players to 1) grow up,  2) when you score. . . go ahead and be happy. . . but act like you’ve been there before, and 3) remember that yes, believe it or not, you are a role model for kids. The response to Baldwin’s antics will be quite telling as well as both a map and a mirror.

Then, there was the phenomenal finish to the game and the classy interview with Patriot’s rookie and game-saving hero Malcolm Butler. When my kids were little we’d watch these games and I would always try to teach. . . “See that? Be like that!” . . . “Hear that? Don’t ever do that!” What a contrast Butler’s humility and grace were to Richard Sherman’s post-game interview a year ago. Refreshing. That’s the kind of stuff we can point our kids to.

And finally, while I’m not really sure if the guy who got ejected was the guy who started the fight at the end of the game (it’s always the guy who retaliates who get’s flagged, right?), we were chatting in our office this morning about how it was both a fitting and unfitting end to what’s been a nightmare of a season for the NFL. When the league and our culture our doing more than ever before to stem the tide of a domestic-violence problem that seems like it might be more widespread than ever before. . . well, you get it. In addition, perhaps we’ve lost our ability to both win and lose with grace.

In a day and age when we find ourselves having to address extended adolescence, adults who act like children, and the general overall juvenilization of our culture, it’s time for us all to take a deep breath and start to encourage each other to grow up. If we don’t, the NFL, it’s fans, and the American culture that sits down together to watch this spectacle every year is going to become more and more like The Lord of the Flies. And that folks, will be the end of us.