Some of the most frightening words in the Bible are these words from the Apostle Paul to the Corinthians: “Flee from sexual immorality” (I Corinthians 6:18). I remember talking to a room full of curious middle school students in the mid-1980’s. Our little middle school youth group had gathered and I was speaking openly and honestly to them about things they were all feeling, discovering, and wondering about as they were experiencing the dawn of one of the most incredible, good, and glorious gifts God has given to humanity.

But like all other human beings, they were living in a world that encouraged them to indulge the good gift of their sexuality without borders and boundaries. My job was to communicate the words of a different voice as clearly as possible. . . specifically the Designer’s plan for how to indulge their sexuality to His glory. I also knew that every adult in that room could attest to the goodness of that plan, especially as we communicated that our knowledge of that goodness came not only from knowing the plan’s Source, but from the ways each of us had strayed from that plan – in thought, word, and deed – over the course of our own lives. And so, we talked about Paul’s command to “flee,” likening the sin of indulging our sexuality without borders or boundaries to eagerly seeking and choosing to stay in a burning building. I’m not sure it’s the best metaphor, but it was the best we could muster at the time. 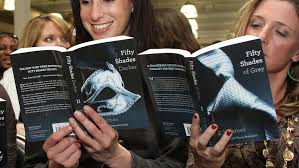 My newspaper, television, the Internet, and that book store display I saw the other day in the airport are all telling me that over the course of the coming days, we will all have the opportunity to choose to walk into a burning building. The long anticipated film, Fifty Shades of Grey, is set to release. Yes, there will be plenty of men who willingly venture into the flames. But the largest draw by far, will be for the women. . . young and old alike. . . who will go to see the film.

I don’t think that we should be at all surprised that Fifty Shades of Grey will be dubbed “blockbuster” after it’s first few days of release. After all, all those voices I was warning those impressionable young middle schoolers about thirty years ago have been convincing. But for the Christian, the one who has chosen the costly life of following Jesus, making the choice to read or watch the story is flat-out foolishness and compromise. Still, the power of those cultural voices and the choices to which they have and will lead (choosing a movie and at least some level of life style), is already clear from the fact that the debate over the movie among Christian women has gone public, especially in the blogosphere. We’re hearing of more and more Christian women who are eagerly and almost girlishly giggling with eager anticipation over the film’s release. Is there no desire, sense, or wisdom to even consider Paul’s loving warning to “flee from sexual immorality?”

Over the coming days, I hope to offer some thoughts that I hope will serve to add to the conversation for the simple reason that the decisions we make on this matter. For today, I thought I would re-post the words from my first blog on Fifty Shades of Grey. . . a post from almost three years ago. Here’s that post. . .

The conversation was between me and two of the women in my life. . . my wife and one of my adult daughters. We were driving from church to Costco. The conversation began with some comments and questions about Fifty Shades of Grey, the first book in E.L. James’ best-selling fiction trilogy. The books are all over the New York Times’ Bestseller List and it seems like women everywhere are devouring them.

In case you haven’t heard, Fifty Shades of Grey is about the exploits of a young college graduate and a businessman. The story is summarized on Wikipedia this way: “The plot traces the relationship between recent college graduate Anastasia Steele and manipulative billionaire Christian Grey. Steele is required by Grey to sign a contract allowing him complete control over her life. As she gets to know him she learns that his sexual tastes involve bondage, domination and sadism, and that childhood abuse left him a deeply damaged individual. In order to be his partner she agrees to experiment with bondage/discipline/sadism/masochism, but struggles to reconcile who she is (a virgin who has never previously had a boyfriend) with whom Christian wants her to be: his submissive, to-do-with-as-he-pleases partner in his ‘Red Room of Pain.'”

As we discussed this current cultural trend, I wondered out loud about doing what I always think is the responsible thing when it comes to evaluating and commenting on a cultural artifact. In this case, the responsible thing is to read the book. The response from my wife and daughter was immediate and direct. . . and I’m glad it was. They told me I didn’t need to go there. I was reminded of what I tell youth workers all the time. . . “Don’t cross the line. . . and you know where the line is for you.” Sometimes we need others to remind us of where our lines should be. I know that the directive of these two ladies was good advice. I’m not going to read this book. . . . for the simple reason that I don’t need to look at pornography to know what it’s about. And from everything I hear, Fifty Shades of Grey is literary pornography.

Upon arriving at Costco, I bee-lined to my favorite place in the store. . . the book table. It’s a regular habit. As always, the book table was surrounded by browsers. The browsing was particularly dense on one side of the table. It was dense with women. What they were looking at and loading up on was a fast-diminishing pile of books. . . which happened to be the E.L. James trilogy. I eaves-dropped and quickly realized that everything I had been hearing and everything we had been talking about in our car was true.

One conversation in particular rattled me. A younger woman was holding the book and pondering the purchase. She had an inquisitive and slightly guilty look on her face. An older women standing nearby happened to see the same inquisitive and guilty look and decided to engage the younger lady in conversation. . . . a conversation that pushed the latter to a tipping point. “Thinking about reading it?”, the older woman asked. “Yes, but I hear it’s a little dirty,” the younger woman replied. At that point, the young woman’s husband appeared behind her with their cart. Noticing her husband was now privy to the conversation, the young woman turned a little red and muttered something about her husband showing up. . . as if the conversation needed to come to an end. She looked like a guilty kid who had been caught with her hand in the cookie jar. The older woman. . . probably in her mid-60s by my estimation. . . looked at her, gave her a little wink, and said, “It’s ten dollars well spent.” With that, the young woman placed the book in her cart. . . . and I watched her exchange a sly little smile with her husband. That was an interesting mentoring moment that says a lot about who we are and what we’re becoming as a culture.

I’ve mentioned before that research shows that on any given Sunday, our church pews in evangelical churches hold people who struggle with pornography. That research says that 50% of the men and 20% of the women in those pews are addicted to pornography. My friends at Harvest USA define pornography as “anything the heart uses to find sexual expression outside of God’s intended design for relational intimacy. It is anything that tempts and corrupts the human heart into desiring sensual pleasure in sinful ways.” (It’s well worth your time to read the full article that this definition comes from). In general, men are drawn to visual pornography. And in general, women are engaging with literary pornography. Fifty Shades of Grey seems to fit the bill.

And so we seek it out, we read it, we love it. . . and we don’t see much wrong with doing any of those things. We’re in trouble folks. Al Qaeda might as well just sit back and wait. . . we’re doing a fine job of taking ourselves down. Anyone else hear Paul Simon quietly singing “Slip Slidin’ Away”?