The battle rages every day for me. I am a broken person. Consequently, my desires, wishes, and wants are marred.  Quite often they move in the wrong direction and they need to be reigned in. I cannot deny it. I must recognize it.

“Following my heart” as a guide in decision-making. . . a mantra preached by today’s culture. . . could wind up in the making of some good choices from time to time. I wish that were true in every case, but it’s not. I continue to realize just how untrustworthy my heart really is. I realize this more and more as I read the Scriptures, grow older, add to my human experience, and as I look in the mirror and am brutally honest with myself. 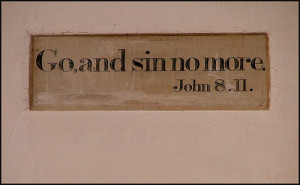 For those of us who are followers of Christ, we tend to be pretty good at trumpeting our understanding of God’s borders and boundaries, especially when those borders and boundaries speak to areas of life where we might not personally struggle. In recent months, my reading and conversations regarding my quest for a deeper understanding regarding homosexuality and other issues of sexual identity have forced me to encounter the very valid criticisms regarding the church’s aggressive outspokenness on the issue of homosexuality, but all-too-often blind eye when it comes to other things that the Scriptures call sin. . . sexual and  otherwise. In effect, we might be guilty of pointing an accusing finger at heart-followers who follows their hearts into homosexual activity, all the while ignoring the way we thoughtlessly follow our hearts into greed, narcissism, injustice, gluttony, gossip, pride, lust, and all other kinds of excess that the Scripture’s clearly call  sin.

The antithesis to following one’s own self and desires is the intentional, thoughtful, prayerful, and informed pursuit of knowing and following God’s will. And yesterday, it was some words written by a man struggling with his strong and ever-present homosexual impulses that not only prompted these thoughts, but which ministered to me in a deep way. The words were penned way back in 1970 in a book titled The Returns of Love:A Christian View of Homosexuality, by Alex Davidson (a pseudonym). The book, published by InterVarsity Press, is a collection of forthright letters to a male friend, written by Davidson about his battle with his homosexual desires.

Davidson’s approach to his battle is exemplary, and I think there is much that he teaches any Christian who is battling with any kind of sinful desire. . . which means, all of us. Davidson strives first and foremost to be biblical. . . that is, he wants the Scriptures to inform his response to his desires, rather than vice-versa. He writes, “The part of the jungle where I am lost may be miles away from the part where you are lost, but the same map and compass can help us both. That map and compass I take to be the Word of God, both Christ the living Word and Scripture the written Word. Why do people who are otherwise thoughtful and sincere find it so easy to break the third commandment? They take the name of the Lord, and call themselves ‘Christians’; yet they take it in vain, by emptying it of what is necessarily contained within it. The only Christ I can accept is not the tenth-hand Christ of the popular imagination, but the first-hand Christ of the New Testament, and once I admit Him I find I have to admit a whole range of teaching which is inseparable from Him – not only His own as reported in the Gospels, but that of the prophets whom He upheld and ratified, and that of the apostles whom He taught and commissioned: in other words, biblical revelation as a whole. It is on the principles the Bible lays down that I try to base my belief and behavior in general, and therefore my attitude to the matter (homosexual attraction) discussed in this book in particular.”

As I pondered Davidson’s words, I thought about all the desires, passions, and heart-pulls that we experience as human beings. When I talk to kids about the “Just follow you heart!” mantra I tell them in no uncertain terms that that’s the kind of stuff the Greek word skubalon best describes. It’s the Greek word for dung.  I also tell them that if I had lived my life by that mantra I would most likely be living in a jail cell right now. Reality is, the same is true for you too.

At the time of writing his book, Alex Davidson had enlisted all the resources he could imagine to see change come in his life. Still, his desire remained. His attitude, once again, is exemplary for all of us, regardless of the type of sinful desires that constantly remind us of their presence in our lives. He writes, “One should groan over it as a sample of the perversions evil has wrought into the world, and long for something better. But if in spite of everything it is there, and the Lord apparently sees fit to leave it there, then surely my concern is to see what He can make out of such unpromising material? Paul’s ‘thorn in the flesh’ came from Satan, and Paul longed to be free of it; but the Lord let it remain, and made it a means of blessing. It was a risk he thought well worth taking.”

Whose heart will I follow? That’s the question our first parents asked in the Garden, isn’t it? And in a world misshapen by their faulty and horribly destructive choice of answers, we must realize that our default setting is to follow in their footsteps.

That’s all the more reason to know and name your sin, to be on guard. . . and to know God’s heart.