While tracking some of the social media chatter after yesterday’s Supreme Court decision I had a few thoughts that, I hope, are helpful. So many of them have to do with how we, as followers of Jesus, respond to what’s happening.

For me, this isn’t about a “culture war.” I’ve never liked that language, I’ve never considered or seen myself as a soldier in a culture war army, nor do I think the “culture war” posture or language reflects a faithfulness to Christ’s calling on our lives. While I believe that politics maps and mirrors the spirit of the times, I don’t believe that politics solves anything or is ultimately salvific. I believe that the “culture war” posture creates and maintains division and anger. That’s why I find fundamentalism repulsive and counter-productive. Instead, I think we do need to adopt a posture of “faithful presence” in the world in a manner that is clearly marked by conversation and love. For those of us who are not happy with the Supreme Court’s decision, we need to look inside and evaluate whether we are angry or grieved. I think there’s a big difference between the two, with the latter being indicative, I believe, of being on the right track. Anger causes us to write off people. Grief is driven by a response of love, care, and concern due to the loss of something good. It is a deep brokenness over a shift from the way things are supposed to be to the way things are not supposed to be. That’s why a life snuffed out by death causes grief. 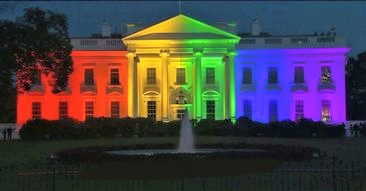 Last night, I grieved. As I was flipping around the TV channels I encountered this picture of The White House.  It’s powerful. And then I pondered what the image represents about our collective spirit. I thought about words I had read just an hour earlier in a little book penned and recently published by my 83-year-old father.  His book is titled God’s Amazing Grace and it’s about the message of John Newton’s magnificent hymn, “Amazing Grace.” My dad wrote, “We think love allows everything and gives everything. But though this be what we think, deep down we know this isn’t true. Love denies that which isn’t good for the one who is loved.” I think my Dad’s words capture well that which a growing majority of people, even Christian people, do not understand about the deep, deep love of Jesus. This is how he loved the woman on the verge of being stoned.

At this point, I think my grief is occasioned far less by the loss of God’s order and design for marriage in our culture. Rather, it is fueled by what appears to be a diminishment of the understanding of “love” among my brothers and sisters in Christ. It is occasioned by the scales tipping perilously from that delicate balance we’ve been called to strike between truth and grace in ways that increasingly leave the truth-side of the balance sitting empty. And when that delicate and difficult balance is lost. . . on either side. . . then we have nothing truly Christ-like and transformative to offer to a broken world.

The culture-at-large is already deeply entrenched in conversation equating “love and welcome all” with “marry all.” Therefore, those who do not marry all are said to not love and welcome all. That’s a horribly erroneous assumption. . . and I hope and pray that we followers of Jesus don’t buy in.

One of my friends posted this powerful and helpful three-word reminder on Facebook last evening. . . “Citizen of Heaven.”