Broken. . . horribly broken. That’s what we all are. That’s why God set into action His grand and marvelous plan of redemption. One day, all things broken will be made new and God’s good creation will be restored to that state of flourishing that was His original intent. . . and which we caused to come undone.

Until then, we must remain alert and on constant watch as we live in the now but not-yet Kingdom of God. . . living as redeemed people who continue to struggle in big ways with our brokenness. You see, even though we have been adopted as God’s sons and daughters, we still have that bent to make decisions that cause things to come undone. We are not immune to sin. Rather, we might be even more vulnerable. 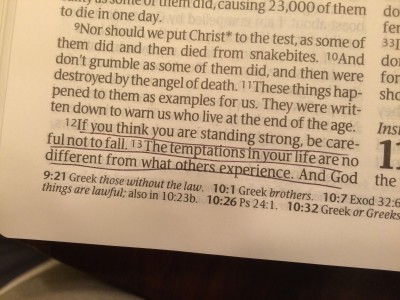 We’ve been reminded of that once more as a result of the high profile “undoing” in the life of Tullian Tchividjian. And what I’ve learned over the years is that rather than pointing fingers, these news stories serve us best when they don’t cause us to focus on the sin of others, but rather cause us to look deeply into the darkness of our own selves. You see, there’s great truth in the familiar cliche, “There but for the grace of God go I.”

This story is just one of many that serve as a sobering reminder to all of us. It’s a high profile story but it’s not the only story. The older I get, the list of stories of moral failure I personally know gets longer and longer. And lest I think for one moment that I am above it all. . . well, a look at the darkness inside sets me straight.

Lately, my friends and I have been talking about the value of having a rich understanding of our human brokenness and sin. The reality. . . I’ve been told and have learned. . . is that the deeper we grow in Christ, the more discouraging and dark our sense of our insides become. It makes sense. The more the light shines into our lives, the easier it becomes to see the depths of our own depravity. A deeper understanding of and brokenness over our own sin is actually a sign of spiritual growth. It also should put us on a constant state of high alert.

Os Guinness includes these words in his book Renaissance: “Indeed, it has always been a mark of the greatest saints that the nearer others thought they were to God, the more they were aware of their sins and shortcomings. When Robert Murray M’Cheyne, the brilliant young Scottish preacher from St. Peter’s Dundee, was once congratulated for his saintliness, he replied sharply: ‘Madame, if you could see into my heart, you would spit in my face.'”

So, a word to youth workers. . . to anyone in ministry. . . and to us all. . . know yourself and your brokenness. Build boundaries and maintain them without compromise. Worship no one. Deny the temptation to claim invulnerability. People in ministry, never forget that you are just one bad decision away from becoming a headline and losing it all. Above all, seek to be obedient not simply to keep yourself from trouble, but to bring honor and glory to God.