Outlandish, over-the-top celebrations in pro football are nothing new. No, they weren’t always “a part of the game.” And, the nature of the outlandish-over-the-topness has evolved (or perhaps “devolved”) over the years. But these displays have been around long enough for folks my age to have had a lifetime of opportunities to use them as teachable moments about the differences between pride and humility. “If you ever have the opportunity to score a touchdown,” I used to tell my kids, “don’t EVER act like that!”

Hey, there’s nothing wrong with getting excited about something exciting. But isn’t there a huge difference between humble excitement and arrogant display? 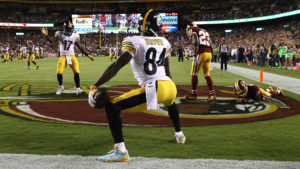 Last night, all I could do was ponder Antonio Brown’s end-zone post-touchdown twerking as I sat alone in front of the TV while channel-surfing between Monday Night Football and American Pickers. With nobody else to talk to, all I could do was think. So, it wound up being a teachable moment for me.

We live in a “HEY, LOOK AT ME!!!” world, don’t we? It’s not enough to just do something anymore. When we score a touchdown (any accomplishment for that matter. . . a good report card, a nice dress, two-decades of marriage, signing a book contract, etc.), we have to insert a tell-everyone-moment before moving on to the next thing in life. Whether it’s taking the time to draw attention to ourselves in the end-zone, posting photos on social media, or carefully crafting humble-brags for everyone to see, we continually scream “LOOK AT ME!!!” and “LIKE ME!!!”, don’t we? Whether it’s about us or it’s about our kids, ultimately we seek attention and validation in the midst of our insecurities.

Hey, I’m not singling out Antonio Brown. Last night, he spoke for all us. At the very least, Brown’s actions serve as an indicator of changing standards of character and civility. And, if we choose to process and respond to Brown’s actions with an attitude of “that was great!” or “what’s the big deal?” we’ve confessed that the same changes that have taken place for many of the guys on the field have crept into the seats in the stands. Perhaps we would do well to ask ourselves how those standards have crept into our own lives.

For the follower of Jesus, humility is not optional. It’s commanded. Jesus consistently took issue with the pride of the Pharisees. He tells us in Luke 14 that “everyone who exalts himself will be humbled, and he who humbles himself will be exalted.” In fact from start to finish, the Scriptures make it clear that hubris is not a mark of those who are Godly. The greatest example of humility is seen in the Incarnation of the One we are called to follow.

The challenge to me last night was to “LOOK AT ME!” and see myself in Antonio Brown. I got to thinking. . . whether I am in public or private, I am always doing something. And, is that “something” bringing glory to God, or to myself?

That was all of us in that end-zone last night. Reality is that we’ve all become end-zone twerkers. Instead of doing things well for the audience of One as an act of worship, our social media world feeds our default desire to create, curate, and share the accomplishments of ourselves and our kids. We must seriously ask ourselves, “Does this reflect humble obedience to God?” and “Who or what am I teaching my kids to value and serve?”