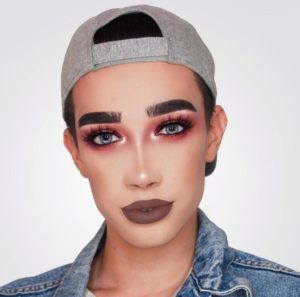 I’m still processing and working to deconstruct/understand what’s behind the tectonic cultural shifts that have set the table for last week’s social media saturation announcing CoverGirl’s enlistment of their first ever Cover Boy. James Charles is a 17-year-old high school senior who has developed quite a YouTube and Instagram following thanks to his online glammy make-up tutorials. His recent CoverGirl photo shoot with Katy Perry has sparked all kinds of thoughts regarding current cultural realities and change. The threads and thoughts are complex and many, for sure. Here are just a couple. . .

First, social media continues to open the door for the adolescent “everyman” and “everygirl” to pursue celebrity, fame, and fortune. Of course, only a little bit of cream ever rises to the top, but the succes of guys like James Charles only serves to feed the frenzy. If kids are led to believe that anybody can maneuver social media as a path to stardom, then chances are that everybody will attempt to maneuver social media as a path to stardom at different times and different levels during their adolescent years. The dangers inherent in this are many. How much time and effort will we waste in pursuit of the elusive golden ring of celebrity? How will we manipulate and make-over ourselves in that pursuit? Will we jettison our true selves in an effort to create a false face that sells? Will we idolize self and unknowingly slide into forsaking our love for the one true God? These are just a few of the important questions to ask, as they can help us better understand the adolescent experience in today’s world, while helping to shape our ministry efforts with our kids. . . whose stories are so very complex.

Second, James Charles, his makeover, and the response to his “brand” is one more example of how the world has shifted from a stance under authority, to a stance dictated in the moment by nothing more or less than preferences. On the same day that I first heard about Charles, I was also wrapping up the book Impossible People by Os Guinness. If you’re not familiar with Guinness and his cultural insights, you should be. Guinness writes about the  the inescapable presence and power of pluralization. Endless choice and change have increased at all levels of our lives. Those “all levels” include gender and identity.

Guinness says that we have moved from a fixed world of tradition and identity to a more fluid world of modernity, “where everything always changes and nothing keeps its shape for very long. . . . People and things are always becoming, but they never become anything for long.” But rather than being reliant on self in these matters, we must realize that neither we nor the universe were self-created. We are not self-sustaining. This is not my world, but rather my Father’s world.

And for me, I would much rather find my place in God’s world in God’s way, than be left to myself to curate, fabricate, and promote a personal brand in ways that require me to step to the center of the cosmos, blur lines. . . and ultimately be left empty.

So, how are you processing these things with kids?