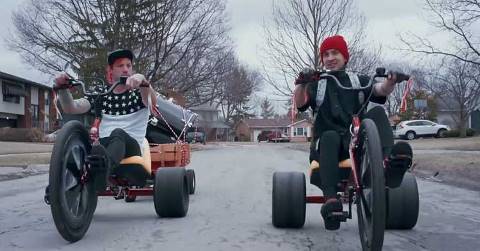 It was a well over a year ago that I sat with our doctoral cohort at Gordon-Conwell Theological Seminary deconstructing a music video that featured a couple of mid-twenty-somethings riding oversized Big Wheels (admit it, we all want one, don’t we?!?) through the streets of their Columbus, Ohio neighborhood. The video addressed a most-serious youth culture issue with a strange combination of playful earnestness. The title of the song, “Stressed Out,” couldn’t be more straight-forward about one of the most pressing problems facing children and teens today. If stress is what growing up brings, then why not yearn for the relative innocence and tranquility of childhood?

Last Sunday night and over one year later, the duo known as Twenty-One Pilots took the stage at the Grammys to accept the award for “Best Pop Duo/Group Performance.” The song was also nominated for “Record of the Year” but lost to some unknown singer by the name of Adele. It’s been fascinating to watch the music of Tyler Joseph and Josh Dun gain traction, particularly due to the now-almost-two-years-ago release of “Stressed Out.” Not only do these guys tackle an issue that must be tackled, but they do so from a perspective that offers evidence of their Christian faith.

Last October, we released one of our 3(D) reviews of “Stressed Out.” If you’re unfamiliar with our 3(D) reviews, they are the fruit of our long-running process here at CPYU of teaching kids to think critically and Christianly about music and media by filtering what they see and hear through the three-step process of Discover, Discern, and Decide. (You can learn more about our 3(D) media discernment tools here). Not only is “Stressed Out” a great discussion starter for students, but it’s worth talking about with parents. . . who, by the way, are oftentimes the primary providers of overbearing pressure and stress in kids’ lives.

We recommend that you take the time to watch the “Stressed Out” video (see below. . . and it’s closing in on 900 million views on YouTube!), and then download our free 3(D) review of the song and give it a read. There are a host of ministry opportunities packed into this song and its video. Don’t miss making the most of this gift from Twenty-One Pilots.