As I think back over my life in youth ministry, I realize that things would have been a lot easier if certain kids hadn’t shown up. Every year seemed to bring a handful of kids who took great joy in exercising their spiritual gift of “disruption.” I’m guessing that this reality is common to us all. Why else would my friend Les Christie continue to present the same well-attended seminar on “Working with Rude, Obnoxious, and Apathetic Students” at youth worker conventions every year since Reagan was President? 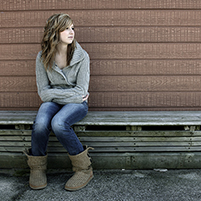 One of the most valuable lessons I’ve learned over the years is that rather than wondering how to get these kids to settle down or stay away, we need to dig deep to discover what it is that’s caused them to become a “thorn” in our youth group’s flesh. Rather than answering them with a spirit of combativeness, we need to adopt a posture of compassion that looks beneath the layers of their acting out, to discover the oft-times harrowing story-line that’s forced itself into their lives. We’re talking here about a growing number of our students. . . students who are already relatively frail and fragile adolescents. . . who have been thrust into bearing unreasonable burdens thrown on them by a culture marked by increasing family brokenness.

More and more kids are coming into our youth groups weighted down by having to navigate the already-difficult-enough road of adolescence in family systems shattered by divorce, fatherlessness, cohabitation, and un-wed parenting. Back in the 1980s, Dr. David Elkind referred to these growing realities as “family permuations.” In effect, they are mutations of God’s original intent for families that leave permanent marks on those unfortunate enough to have to live in them, grow up in them, and launch into adulthood from them. Kids whose lives are marked by these anomalies are more prone to engage in all kinds of destructive and self-destructive behaviors, including things like premarital sex, substance abuse, depression, violence, and cutting. . . just to name a few. Because of the disruption in their lives, they are also more prone to make a disruptive splash when they show up in our youth groups.

A quick glance at the statistics indicate that what once was a “handful” who showed up at youth group from a context of family brokenness could now, for many of us, be a majority of our kids. According to the U.S. Census Bureau, one out of every three children is living apart from their biological father. Over forty percent of the children born in the United States are now born to unmarried women. Nearly 20 percent of all births are to cohabitating parents. Four percent of all children lived with two unmarried parents in 2012. Almost 40 percent of all children will spend time in a cohabitating household by the time they reach the age of 16. And if this is the kind of world our kids are growing up in, how can we not expect them to be even a little bit rude, obnoxious, disruptive, and apathetic when they show up?

My point is rather simple: These are the very kids who need to be in our youth groups. . . and our youth groups need to be safe places where they are welcome to show up with whatever messes life may be throwing at them. They belong there, and we must do everything we can to let them know that they belong.

In her wonderful book, Forgiving Our Fathers and Mothers, Leslie Leyland Fields writes about our need to enter into the sufferings of others. . . sufferings that we may never have experienced ourselves and therefore have little ability to understand. In effect, it’s about taking the time to listen to the other person’s story, to show them grace, and to forgive them for acting out of their pain in ways that just might be hurting us. Yes, Fields is writing about doing this with our parents. But I think her challenge is also one that we need to hear and heed in our youth ministry world with those kids whose brokenness leads to disruptions that make waves in the neat little youth groups for which we yearn. What would happen if we would pray for hearts that are sensitive to the most broken of kids and their sufferings? No, we don’t want to excuse or write off disruptions in our youth groups. But we do want to love the disruptive rather than “divorce” or abandon them.

Jesus has something to say these kids. He tells them, “Come to me, all of you who are weary and carry heavy burdens, and I will give you rest” (Matthew 11:28). Is he saying that through us?