I’ve been engaging in a little back and forth over the last couple of days with a guy who was providentially placed in my path a couple of days before I left seminary and moved to Pennsylvania for a return to local church youth ministry. It was July 1985 and the encounter happened in one of the academic corridors while I was waiting to meet with a professor.

Dan Jessen was teaching Christian Education at Gordon-Conwell Theological Seminary at the time. I had never had Dan for a class so I didn’t realize that he was a bit of an extrovert who loved engaging people in random conversations about things that matter. I was standing outside another professor’s door when Dan stopped to introduce himself. He asked if I was a student and when I told him that my student days were just about over, he then asked me what I was going to be doing after I left campus. “I’m going back into local church youth ministry at a church outside of Philadelphia.” Without hesitation, Dan then asked a question that changed just about everything for me: “What are you going to do with parents?”

Whoa. Was this a test?

In hindsight, my twenty-something answer was honest, lame, and even a bit arrogant. “I’ll do what I’ve always done with parents. I’ll pull them together for a couple of parent meetings a year.” And. . . that was it. Reality was, I thought my age and experience qualified me to go and do what ignorant, old, and out-of-touch parents could ever do. . . that is, minister to teenagers effectively.

As I remember it, Dan told me to sit down. And then he proceeded to issue a challenge that changed everything. In a matter of five minutes he unpacked a theology of spiritual nurture that pushed me from top dog to second fiddle. “God has called parents to assume the primary role in the spiritual nurture of their children.”

I walked away from that conversation and back into youth ministry with a resolve to be obedient to God’s order and design. Rather than replacing parents, I was now going to do all that I could to form a youth ministry that would assist parents. 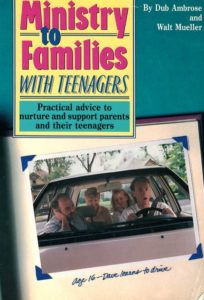 To my surprise, embracing and living out that calling was quite uncommon at the time. So novel was our approach that even thought I was learning as I was going on and flying by the seat of my pants, a publisher asked me to help others understand what it was that we were doing. That resulted in a book, Ministry to Families With Teenagers. The real fruit, however, came in a partnership with parents which yielded some amazing growth in teens, grown-ups, and families.

After several years of ministry at that church, a group of those parents approached me to help them understand the cultural realities of their teenagers’ world. While overwhelmed by their request and wondering how I could ever help them as they had requested, I figured I ought to give it a try. I’ll save the complete story for another time, but what came out of that was the birth of The Center for Parent/Youth Understanding almost 28 years ago!

One guy. One provocative question. One huge shift in ministry trajectory and focus. And today, I am grateful for God’s goodness and Dan Jessen’s boldness.

Youth workers. . . what is the one question, conversation, or encounter that’s had the greatest influence on your ministry?

(My recent conversations with Dan have been prompted by some back-and-forth about his new book, “Youth Growing Up.”)