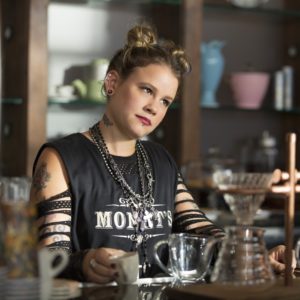 If you’re under the age of 35, you probably didn’t notice it. If you’ve been around longer than that, you may have picked up on it. It was the role caffeine played in the recent Netflix hit, “13 Reasons Why.” It seems that in just about every episode, some combination of characters wound up hanging out at Monet’s, ordering a variety of caffeinated designer drinks and then sitting around to process the highs and lows of adolescent life. For those of us who are younger, Monet’s was a fitting background reflecting the caffeinated realities of our own teenage years. And for those who are older, we might find ourselves asking, “When was it that kids started drinking so much coffee?!?”

Of course, caffeine-infused beverage consumption has been going on among teens for a long, long time. Everything from soda, to energy drinks, to specialty coffee drinks have been a staple of adolescent life in some form or another, especially in recent years. Marketing, peer-acceptance, and the anxiety of over-scheduled pressure-cooker lives have all combined to feed the trend. For those millennials who have moved out of adolescence, reports are that more and more members of the generation are spending more money on their morning, afternoon, and evening brews than they are dumping into their retirement plans.

If you’re in youth ministry, you’ve most likely got a host of kids who show up for youth group and Sunday morning worship with both hands full. . . one with a smartphone. . . the other holding a Starbucks cup. It’s become so much a part of normal life that nobody ever questions whether or not this is healthy for us and our kids.

This week, my newsfeed has pushed several stories about sixteen-year-old Davis Allen Cripe, a South Carolina teen who fell over dead on April 26 after ingesting a McDonald’s cafe latte, a large diet Mountain Dew, and another energy drink. The coroner reports that Cripe died from a caffeine-induced cardiac event. In case you’re wondering, Cripe had no heart conditions, and there were no drugs or alcohol in his system.

Davis’s dad, Sean, spoke at a press conference earlier this week. It’s heartbreaking. Yet, it is powerful to hear his father’s hope in the Gospel. His warning must be passed on and heeded. Give it a look (below), and then check out the infographic on the bottom of the page.