Okay. . . . this one might get me in some trouble. And it’s all because I’m increasingly convinced that we’re doing something wrong in youth ministry. . . and perhaps in ministry in general. We’ve been chugging along thinking that we’ve been doing it right. As a result, we continue to do it wrong because we think it’s right, and in doing so, we’re undermining the very work of the very God who we pride ourselves in serving.

What’s prompted my thinking on this matter is a publicity piece I read regarding a self-described “youth evangelist” who touts his “success’ by advertising the fact that he’s led over one million kids to Christ. Sorry, I just can’t take that too seriously. I wish I could, but I can’t. To be fair, this isn’t the first time I’ve heard claims like this. I consistently run into pastors, youth pastors, and even people in the pew who when asked about their church or ministry, immediately default to talking about the metrics. 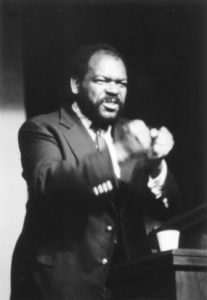 My hesitancy to trust the numbers started way back in the late 1970’s when, as a college student, I attended a conference where evangelist Tom Skinner was the keynote speaker. I can still visualize Skinner, a brilliant man whose passion was deep, talking about the waning influence of the church on American culture. In an effort to challenge us to take our faith seriously, Skinner asked a very thought-provoking question that has stuck with me since that day.  “George Gallup’s research tells us that 50 million Americans describe themselves as ‘born again Christians,’” said Skinner. This was great news. . . . until Skinner lowered the boom that rocked my simple and satisfying world. He soberly asked, “If there are 50 million born again Christians in America, where are they?” Skinner’s thought-provoking  question and the reality it exposed has haunted me for 40 years. I thought about it again when I read the youth evangelist’s claim.

I’m guessing the “successful” youth evangelist has probably (or maybe) seen over a million kids walk forward or raise their hands in response to his invitation to “make a decision” for Christ. I’m in no position to judge his motives or the accuracy of his numbers. But I think we can, and should, question his  – and our – quality control. Part of the problem lies in the very fact that we spend so much time counting up the numbers so that we can judge our “success,” validate the effectiveness of our ministries, and look good when we report back to our supervisors and church boards. Rarely do we go back a year later to see if the raised hand yielded a radically changed life. If we did, our math would have to include a little less addition and a lot more subtraction.

The reason? We’re too focused on getting kids’ hands up that we don’t offer a way for the one who raised the hand to learn about the necessity and shape of the changed life that should begin the minute the hand goes down. Or, even more troubling, we focus only on getting kids’ hands up because our theology of salvation has failed to include a place for what happens after.

The result? Add up the numbers that are yours, mine, and everybody else’s. Pretty impressive, huh? Until we ask the same question Skinner asked over 40 years ago: “Where are they?”

That question should force us to ask ourselves some other questions. As parents and youth workers, we invite – and we should! – the kids we know and love to commit their lives to Christ. But are we taking the time to explain what a life of following Christ here on this earth is all about, how difficult it is, and what it requires? Do we ever talk about the fact that following the God-man who bled and suffocated on the cross requires his followers to take up a cross of their own? Do kids know that there’s a life of integrating faith into every minute and every activity that’s to be lived between the second their hand goes up and the second their heart stops beating? In order to come away with affirmative answers to each of these questions, we might have to rethink our understanding of conversion – that wrong thing that we’ve been thinking we’ve had right for so long. Perhaps if we understood conversion, then our ministries, our kids, our understanding of “success,” our numbers, and most importantly our world, would look markedly different.

For too long youth ministry has been about getting kids “saved.” I struggle with our definition of what it means to be saved and the methods we employ to get young people saved. In his thought-provoking book on conversion, Beginning Well, Gordon Smith says that the church is guilty of thinking of conversion in “minimalist terms: What is the very least that a person needs to do in order to be freed from the horrors of hell and assured of the glories of heaven?” Dallas Willard calls this the “gospel of sin management,” that belief that forgiveness alone is what Christianity is all about. It’s a faith that has nothing else to do with the rest of your life. You’ve raised your hand, you’ve walked forward, and now you’re saved. And while it’s probably not intentional, we then proceed to leave the impression that all there is to do now is to get on with life. . . . until the next time you hear the invitation and say “yes” again. . . . kind of like adding another rider onto your eternal life insurance policy.

For some, conversion is only about exchanging your one way ticket to hell for a guaranteed ticket to heaven – a ticket you cash in when life on this earth ends. Until then, you continue to live your life as you choose. Conversion has nothing to do with this life, except living with the assurance of heaven in the next. The result is there’s nothing that requires your life on earth to be marked by anything that sets you apart from others whose hands have never gone up.

For others, conversion is about a change in destination when life on this earth ends – from going to hell to going to heaven – and then making every opportunity while you’re still here to tell other people how to do the same. While along with your conversion comes a new responsibility to witness in a way that gets more hands up in the air, life on this earth is really about separating yourself out of this world to keep yourself from getting poisoned by this world, while focusing your hopeful gaze on heaven in anticipation of the day when your escape will be complete.

For both, the Gospel is not so much about how you live your life now, but about where you’ll live your afterlife then.  In other words, it’s entirely possible that there are 50 million self-described born-again American Christians, and we have no clue where they are – either because they blend in, or they’ve run away to hide. The real problem with the “saved” is that they don’t understand “salvation.”

It’s time to understand and act on the fact that conversion is not just about belief, repentance, forgiveness and eternal life. Something else has to happen after someone accepts Christ as Savior. Salvation makes a person free from sin and a slave to righteousness. We are re-birthed people living every second of our new life on this earth under the reign of the King who has made us His own by calling us into His Kingdom. We are called into the joyful life of integrating the Christian faith and the Kingdom of God Jesus inaugurated and preached into all of life. As Paul Tripp says, our kids need to know that “when they came to Christ, it wasn’t just their past and future that changed; no, everything in their lives right here, right now changed.”

When we call young people to faith, we’re not calling them out of the world and into heaven. Rather we’re calling them to live God’s will and God’s way in the world. Theologian David Wells describes it this way: “True conversion is not an isolated experience but one that is related to a life of discipleship. . . . Discipleship belongs to and should follow from conversion the way that natural life belongs to and should follow from live birth. . . . And just as there is no discipleship without conversion, so there is no conversion without an ensuing life of discipleship that involves growth in moral maturity, a deepening faith, and loving service.”

Believe it or not, Jesus didn’t just come to save us from our sins. The way many of us have been raised makes this statement sound like heresy. But it’s not. The real heresy is the belief that Jesus only came to save us from our sins. Think about this: when we pray the words “Your Kingdom come, your will be done, on earth as it is in heaven,” we are asking God to unleash his Kingdom through us as we live his will and his way in every nook and cranny of our lives and His world. True conversion reorders and transforms both the now and then.

I love how Charlie Peacock describes conversion and the place of the converted in the world: “The story of Noah and his family challenge the common misconception that the redemption story is about God’s saving individuals out of the world. That idea reduces salvation to personal escape from the evil physical world to a blissful spiritual heaven. In reality, redemption history is about an ongoing story and process where people are saved in the world. The way they are saved out of the world is by God’s choosing them for himself, removing them out of the world’s ways, giving them his ways, and then leaving them in the world to continue the work he has assigned them.”

My hope and prayer is that my story will be swallowed up by God’s story. My prayer for my kids is the same. If that’s what happens when the hands go down, nobody will be left wondering who they’re to be where they are right now. That’s what it really means to say, “Yes, I want to be saved.” If that’s the message we communicate in our youth ministries, when the kids’ hands go down those hands will be getting right to work. And for the rest of their earthly lives, it will be impossible for the world to miss seeing where they are.

What would happen if you would kick-off and continue this school year trumpeting this message?