Based on your age, you may or may not be aware of just how significant a cultural figure the man known as “Hef” actually was. . . or perhaps I should more accurately say is. Shortly after his death last evening, his son Cooper stated that his father lived an “exceptional and impactful life as a media and cultural pioneer.” That statement is 100% correct, depending on how you would translate and understand the word “exceptional.” Cooper Hefner also tweeted that his father was a powerful advocate for “free speech, civil rights and sexual freedom.” Consequently, whether you know who Hefner is or not, if you’re a living, breathing, human being who is swimming in the soup of today’s culture and youth culture, Hefner’s ideological DNA exists within the sexual beliefs and behaviors driving our culture and ourselves.

Pornography, or more accurately “sexual immorality”, moved into the modern U.S. mainstream when Hefner published his first edition of Playboy back in 1953. Yes, sexual immorality has been around since Genesis 3:6 in terms of beliefs, desires, and behaviors. Pornography certainly not anything new. But by pulling the curtain back on societal taboos, Hefner was a leading figure in the move to rewrite moral codes. In effect, Hefner may have been the guy standing on top of the mountain, kicking the first rock which has eventually morphed into the growing landslide of the sexual revolution which continues today.

Like all things crafted by God and declared as “Good!”, our sexuality is broken. And rather than pursuing redemptive sexuality, Hefner encouraged us to indulge our sexual brokenness as “sexual freedom” without borders or boundaries. 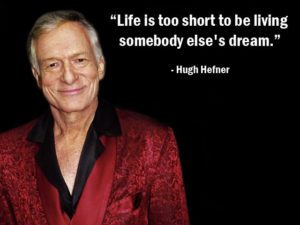 In some ways, Hugh Hefner wrecked my life. I was born just three years after the launch of  Playboy. And just 11 or 12 years into my young life, I joined several friends in taking a first-look at Hefner’s printed monthly. I will never forget it. It was the first time I had seen published pornography. In fact, like most men, the memory is seared into the fabric of my brain. And, like all human beings, my sexual brokenness has existed inside of me in ways that changed on that day just before the dawn of my teenage years.

If I’m honest with myself, it wasn’t Hugh Hefner who made me do it. It was me. And since then, I thank God that a history of sexual indiscretions in thought, word, and deed can be redeemed . . . even though the battle still rages. And, I thank God that His good gift of sexuality can be thought about, exercised, and understood in all its intended glory (by the power of the Holy Spirit) through pursuing sexual integrity to the glory of God and by the grace of God.

While reading this morning about Hefner’s death, I was reminded that several years ago, Hefner purchased the burial vault next to Marilyn Monroe’s. Why? So he could spend eternity with his magazine’s first cover girl. Another one of his crazy ideas, I know. And while we might be tempted to applaud the death of Hugh Hefner as the end to an era, there are some other ways of looking at this.

First, Hefner’s death has not brought an era to an end. The rocks of the sexual revolution landslide are still tumbling. . . picking up speed, volume, and mass.

Second, just as Hefner’s message of “sexual freedom” without borders and boundaries continues to flourish, our role is to preach the Gospel to ourselves and to our kids so that we might continually hear the message of what leads to true sexual flourishing over and above the loud, compelling, and convincing voice of culture. . . that sadly, we are apt to not even question anymore ourselves.

And third, among those of us who see and understand eternity from the perspective of the One who created, called, and redeemed us, there should be no applause over Hugh Hefner’s death. Rather, we should be grieving over his beliefs, his behaviors, and the gods of his heart. We don’t know his heart condition as his earthly story ended, but we do know that his actions and beliefs regarding end-of-life and the after-life were horribly misinformed.

I know it sounds weird, but I’ve spent time pondering Hugh Hefner this morning. . . his impact on my life, my kids, and my culture. It hasn’t been much of a direct influence since that day when I first looked at his magazine, but the influence has been strong. And, I can’t ever self-righteously forget that there, but for the grace of God, go I.

Let’s continue to unapologetically  pursue, live, and speak a message of sexual integrity.

Life is way too short to not be living God’s grand and glorious design for His good gift of sex and sexuality. I’m guessing Hugh Hefner knows that now.