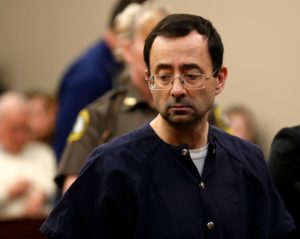 The story coming out of a Michigan courtroom this week is sobering, horrifying, and one that cannot be avoided. Dr. Larry Nassar’s systemic serial abuse of more young ladies than we probably know is frightening. More than 150 brave girls stepped forward during the sentencing phase of his trial to address the ongoing fallout his actions have had and continue to have on their lives. And if you’ve been tracking with the news, the fall-out from Nassar’s indulgence of his depravity is stretching beyond these girls to their families, along with a variety of other institutions.

Yesterday, I listened to a numbing episode of the On Point podcast from NPR, “Blame, Justice And Courage In Larry Nassar Sex Abuse Case”. The evening before, I watched former gymnast Rachel Denhollander’s compelling statement to the court and Nassar (see video clip below). In between and after, I read several news reports that clarified much of what Nassar perpetrated along with the results of his crimes.

One common thread that came through loud and clear in this case, as it has in so many others, is that there is always a culture of enablement that allows these things to happen and continue to happen. On the On Point podcast, it was made clear that in the Nassar case, there was a culture, systems, and institutions that combined to enable his crimes. Among those listed were USA Gymnastics, Michigan State University, and the U.S. Olympic Committee.

But as I pondered the list, I wondered who else might be complicit in the enabling behavior. While I am not a psychologist, I’m sure that there are many pathologies present in Larry Nassar’s life. Lying, Narcissism, and sexual addiction might be among them. Larry Nassar chose to do what Larry Nassar chose to do. Larry Nassar is reponsible for his crimes, and the sentence leveled on him by the judge recognizes that fact. And I’m sure that over the coming months we will learn more about Larry Nassar’s background, his upbringing, and the experiences of his life that were not only formative, but that fed his pathologies and behaviors.

As we continue to process this heartbreaking story, I wonder if we can move back upstream to discover what it is we dump into the river of young lives that leads to this kind of thing. I’m sure that the variables are many. . . and many of them will never be fully understood. But there are a few very initial takeaways and thoughts. . . initial and not-fully-formed. . . that I’ve been thinking about since listening to the discussion on On Point.

First, Larry Nassar’s brokenness and depravity is universal. While his crimes and immoral behavior may be nuanced and unique, the heart from which they flowed is one shared by all humanity. I can’t read God’s story without recognizing, as Bob Dylan sang, that everything (including me) is broken. And what the broken human heart is capable of is horrifying.

Second, one of Nassar’s victims has questioned how he, the groomer, may have been groomed himself. I too wonder what influences were poured into Larry Nassar’s life. Again, I know his story and his pathologies are complex. But what did not happen in Nassar’s life that should have happened? And what was happening in Nassar’s life that should not have happened? And, in this mix of influences, how many of them were influences of his own choosing and how many were choices made for him? To be certain, Nassar’s inexcusable crimes are his responsibility. But perhaps we can learn from his story in ways that might help us to exert positive influences, remove negative influences, eliminate enablers, and promote human flourishing in ways that might prevent this kind of depravity from rearing its ugly head again in crimes perpetrated against young and old alike.

Finally, as I thought through the list of enablers, I realized that we might be tempted to stop and wag a disapproving finger at the institutions mentioned over and over again as the story has unfolded. Certainly, there is complicity. But are those institutions the only institutions complicit in this case? I wonder that if in our considerations regarding this story and the future of our kids, we should be contemplating how our culture might actually be feeding and enabling this kind of wickedness.

When I read Nancy Jo Sales’ 2016 book, American Girls: Social Media and the Secret Lives of Teenagers, I encountered some clear analysis of the differences in the ways that boy and girls are driven to curate themselves in their photos on social media. Sales says that when you look at the selfie images, boys emphasize their physicality while girls emphasize sexuality. Boys depict themselves in poses that exhibit hypermasculinity, while our girls assume poses of hypersexuality. Boys assume a posture of dominance, while our girls assume a posture of submissiveness. Boys demand that girls “send noodz”, while our girls are expected to comply with those demands through a supply. Sales asserts that these standards are being shaped by what our kids are seeing in pornography. I would agree.

I continue to wonder. . . in a world where pornography is affordable, accessible, and anonymous, are we allowing ourselves and our kids to be nurtured into beliefs, assumptions, and behaviors that will foster the kinds of depraved behavior we see in Larry Nassar? To deny the connection is foolishness. And to assume that what our kids are seeing in pornography is harmless and benign, is equally foolish. Is it possible that we are enabling a generation to pursue sexual selfishness (and even crime?) through our unwillingness to make this connection and push back?

Perhaps its time to enable human flourishing in any way possible. Rachel Denhollander was the first to step up and publicly accuse Nassar. She initiated the throwing a stick into the spokes of a culture that enabled Nassar. There’s a lesson there for all of us.