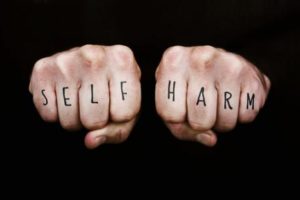 The sad reality is that since receiving that letter, self-injury has swept through youth culture like a plague. It’s not only a sign that more and more kids are hurting more and more deeply, but that cutting is no longer an unspoken and solitarily-discovered coping mechanism for those who hurt. It’s become popularized and thrust into the mainstream as an option for self-therapy and self-care through casual conversations, music, and film.  In 2003, Catherine Hardwicke’s poignant film, Thirteen, depicted 13-year-old Tracey’s venture into the world of coping with a chaotic and confusing transition to adolesence through cutting. Earlier this year, the always-relevant Pink took music-fans into the bathtub of a teenager who cuts in the video for her chart-topping song, “F___ing Perfect.” These depictions and others stand as brutal reminders of an increasingly mainstream reality many of us would rather ignore.

If we care at all about kids we should learn to recognize, understand, and answer these visual cries of a generation longing for spiritual truth, emotional healing, and answers. Self-injurious behavior (SIB) or self-inflicted violence (SIV) has been defined as “the commission of deliberate harm to one’s own body. The injury is done to oneself, without the aid of another person, and the injury is severe enough for tissue damage (such as scarring) to result. Acts that are committed with conscious suicidal intent or are associated with sexual arousal are excluded.” By May 2013, the Diagnostic and Statistical Manual – 5 included a new diagnosis  – NSSI, or Non-Suicidal Self-Injury (Diagnostic criteria: “Over the past year, the person has for at least 5 days engaged in self-injury, with the anticipation that the injury will result in some bodily harm. No suicidal intent.”).

Since SIB is still stigmatized and usually hidden, accurate statistics on its prevalence are difficult to find. What is known is that the average self-injurer begins at age 14 and continues the practice, usually with increasing severity, into his/her late 20’s. Among adolescents, the ratio of boys to girls who cut themselves is equal. Most teens and young adults who exhibit SIB are sometimes the ones who you’d least suspect. For the most part, they are bright, intelligent, and generally “normal”.  One recent study of high school students in the Western part of the U.S. estimates that between 26 and 37 percent were cutting.

I am alive I feel pain otherwise numb

I may as well be a plastic baby doll

Not plastic after all . . . but human babydoll.

What should we make of this disturbing practice?

First, we must come to an understanding of the path this trend looks to take. We can be sure that the stigma associated with SIB will continue to disappear as this generation’s bloody cry of confusion and self-hate appears on individual bodies and collective soul. Consequently, SIB will become more pervasive as a “normal” coping mechanism. If that happens, chances are good that SIB might move so far into the mainstream of youth culture that kids who exhibit none of the classic SIB precipitating factors will cut themselves simply because it’s fashionable. In addition, we can expect that increased “publicity” for cutting will plant the idea in younger and younger minds. Eventually, we might expect SIB experimentation to be more common among curious and impressionable young elementary school aged children.

Second, we must consider how to respond in a loving and grace-filled manner. We could shake our heads in disgust, write it off as another link in the chain of “typically bizarre adolescent behavior”, then walk away hoping that the next generation of children and teens will somehow get their act together and make more out of their lives. But if that’s our approach, we haven’t truly heard “the voice on the skin” for what it is. Rather, we will have added another ugly link into the chain of ignorant and inappropriate responses to young people today. Our ignorance will only serve to remove opportunities for kids who cut to hear a message of healing and love.

Third, we must be able to recognize the signs. In his helpful book, Hope and Healing for Kids Who Cut, Marv Penner says there are many “clues” that something may be wrong. We must look for things like unexplained cuts and bruises, wearing long sleeve shirts or long pants during warm weather, wearing jewelry or wristbands that cover cuts and scars, a collection of cutting paraphernalia (razors, knives, etc.), bloodied tissues or towels, first aid supplies, or rubbing wrists through their sleeves. If you suspect, ask.

Finally, we must diligently work to exert a redemptive influence on those who resort to cutting. Their cries must be answered through counseling and long-term relationships with mentors who speak and live an example of redeeming love. For many, it will be the first time someone really cares. While you can always care and walk with them through the issues, be sure to point them to a trained and competent professional counselor who has a good track-record of ministering to and helping cutters.

Judged by appearances, 19 year old Renee is your typical college freshman. What nobody knows is that she’s been damaging herself since she was 11 years old. “I use a needle,” she says. “I jam the needle down as far as I can, and then move it back and forth until I have a long cut on my finger. I repeat this until I’ve slashed up both my hands. I almost want someone to notice, to ask me what happened. But I’m so much of a loner that no one’s ever even noticed. I wonder if people DID notice, if they would care.”

-Download this blog-post “Trend Alert: Cutting – Deeper and Wider” in pdf format to give to parents in a handout format: click here.

-Recommended Reading: Here are three books to get you started. . . and to keep on your shelf at no more than arm’s distance, as some day, you will need them.

Hope and Healing for Kids Who Cut, by Marv Penner

Help, My Kids Are Hurting: A Survival Guide to Working With Students in Pain, by Marv Penner

The Youth Worker’s Guide to Helping Teenagers In Crisis, by Rich Van Pelt and Jim Hancock