Watching news footage of kids filing out of the building after a school shooting is gut-wrenching. It leaves us broken, hurting, and realizing that things are not they way they are supposed to be. And then there are the all-too-often (sometimes daily) reports of racial injustice, mental health crises, and a host of other social problems that are further evidence of the fact that things are not the way they’re supposed to be in the world of our children and teens. And this realization of the way things are points us to the fact that we long. . . in fact groan for. . . things to be the way they are supposed to be.

The practice of “dual-listening”. . . listening to God’s Word and listening to our broken world. . . instills in us a perspective that fuels hope for healing these awful realities. And when we are aware of and not ignorant to what’s happening in our broken world, we are then driven to bring the light of God’s Word to shine on the darkness of the broken realities which exist.

And so it was gut-wrenching to spend the last couple of days binge-watching Season 2 of the Netflix series “13 Reasons Why” . . . a highly-criticized yet widely-viewed depiction of life’s brokenness as it visits teenagers and their world.

We’re going to be recording a “Youth Culture Matters” podcast on the latest 13 episodes of the series in a few days. Stay tuned. But until then, perhaps the fact that processing in writing what I saw is helpful for me might be somewhat helpful, I hope, to you. 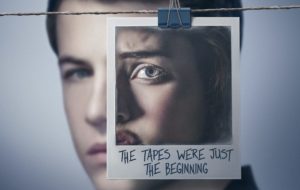 There are many questions I’ve been asked about the show over the last few days, most of them coming from youth workers and parents. “Should I watch it?” “Should I allow my kids to watch it?” “Do you think its accurate in its depiction of teenage life?” “How should we process this?” All of those are good and necessary questions. Allow me to offer some initial observations. . . and as usual, in no particular order. Bear with me here as my head is still spinning as I try to sort it all out.

First, my initial reaction to Season 2 as I was just a few episodes in was this: “They should have put this thing to rest last year.” Of course, many believe the show should never have come to life in the first place. Part of my initial reaction was due to the fact that it felt like they were trying to breath new life into the show and it wasn’t working. But after a few episodes, it pulled me back in, albeit with great pain. Last year, I thought the potential value in the series was raising issues present in the teen underworld that adults are largely ignorant of. Without knowledge and awareness, how are we to even begin to think about responding to those issues? This year, I believe the series went deeper into those issues while raising other issues. . . all nuanced by the various personalities struggling with their own unique blend of problems and human brokenness.

Second. . . and I can’t emphasize this enough. . . the content warnings that run before each episode are warranted. The show is raw and blunt in its depictions of horrible things. Nothing like this made it to the small-screen just a decade ago. Today, “13 Reasons Why” has stretched the envelope. At times, I wanted to turn it off. I realized that I was processing it through an older and I hope wiser viewing lens. Several times I put myself in the place of middle schoolers and high schoolers who were binge-watching the show at the same time.

Third, I continue to ask this important question regarding the series: “Is this really what life is like for teenagers today???” I study youth culture. Still, I’m not sure that I can answer that question with intelligence and accuracy. My friend Chap Clark always talks about that “world beneath” inhabited by teens. That world beneath was referenced in a variety of ways during Season 2 as character narration reminded us several times that adults, teachers, and parents have no idea what’s happening in the lives of kids today. I do believe that the show’s depiction of ignorant adults (not all the adults) is somewhat stereotyped. I found it hard to believe that parents were reacting to things the way they were. My wife and I both agreed we would be more direct, more proactive, more involved, etc. So, if this is an accurate portrayal of parenting today. . . well, no wonder our kids are in big trouble. I also find it hard to believe that high school kids are functioning, thinking, processing, and communicating at the level of complexity which the show depicts. I certainly wasn’t developmentally able to do so when I was that age. And, I’m not sure I know more than a handful of kids who would be able to do that now. I’m not selling kids short here. I just think they functioned at too high a level of sophistication in the series. But one thing is undeniable. . . the problems portrayed are very real in today’s world. Depression, anxiety, suicide, family breakdown, narcissism, bullying, substance abuse, hypersexuality, privilege, entitlement, injustice, etc. . . all are there for sure. Perhaps it was the heaping on of these problems in a greater concentration that made this more difficult to handle.

Fourth, we need to keep from jumping to conclusions about the influence “13 Reasons Why” is having on kids. Here’s why: no two viewers will process the show the same way. We say it here all the time here at CPYU. . . culture is both reflective and directive. When I teach skills for cultural exegesis, analysis, and response we emphasize this fact. Another way of saying it is that culture is both descriptive and prescriptive. What does this mean? Again, it means that each viewer will filter it through their own experience. For the most troubled kids among us, “13 Reasons Why” might put pictures and voice to the things they are experiencing and feeling. . . things that they might not be able to express for themselves adequately in words. If a young person watches “13 Reasons Why” and then turns to us and says, “That’s me,” well. . . we had better listen and act quickly. In this way, the show can serve as a kind of diagnostic tool. But for the impressionable kids in our midst who are looking for guidance and direction on what to believe and how to behave, “13 Reasons Why” offers a disturbing and troubling narrative. While there are glimmers of hope and healing in solutions pursued, I’m afraid those solutions are rooted in the cultural narrative rather than the biblical narrative. Yes, the cultural narrative can get it right partially sometimes and maybe even fully on occasion. But I saw little of that in this season of “13 Reasons Why.”

Finally (and certainly there will be more to say in coming days as we process the show more fully), rather than asking the question “Should I watch?”, we should be going to our students and asking “Have you watched?”  And if they answer “yes,” then we must watch it as well. We cannot speak intelligently and with authority in response if we have not walked through the “Athens” of today’s world that is “13 Reasons Why”. . . looking carefully (as Paul did in Acts 17) before opening our mouths to speak. For those who have indulged their curiosity and viewed in ways that result in a directive  influence, we need to offer correctives, borders, and boundaries. I in no way believe that the show is a healthy viewing option for those who simply want to go and engage mindlessly in an entertainment experience. And for those who have seen a reflection of their own experiences, thoughts, feelings, and lives, we need to sit with compassion and listen to them, asking them what the show is speaking for them. Once we have listened, we must then engage in whatever it takes to be a neighbor and get them help, both short-term and long-term.

After finishing a difficult day of binge-watching Season 2 of “13 Reasons Why” yesterday, I read this from J.I. Packer this morning. . . “Only while there is hope is there life. Take away hope, and life, with all its fascinating variety of opportunities and experiences, reduces to a mere existence – uninteresting, ungratifying, bleak, drab, and repellent, a burden and a pain. People without hope often express their sense of reality and their feelings about themselves by saying they wish they were dead, and sometimes they make attempts on their own life. Hope generates energy, enthusiasm, and excitement; lack of hope breeds only apathy and inertia. So for fully developed (as distinct from partly diminished) humanness, there needs to be hope in our hearts.”

God bless our children and teens. May they hear and respond to the only One and only Gospel that gives hope and life.