It rattled me. It was a punch in the gut. When U2 voiced their opposition to Ireland’s ban on abortion and related support for the referendum to overturn the abortion ban, I was distressed. A band known for integrating their faith into matters of justice had done an about-face that was so discouraging. Their vocal support and its underlying values are indicative of an attitudinal shift occurring in our ranks.  Personally, I felt as if a voice of light had suddenly chosen to extinguish itself. 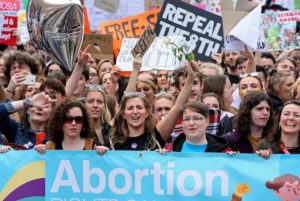 Last weekend, news came that the Irish polls had closed and the referendum had passed in a landslide. . . 66.4% to 33.6%. Again, these numbers are indicative of a cultural shift. As I watched the emotionally-charged and happy celebrations in Ireland, I couldn’t help but grieve for the lives which would be lost.

Then, I read these words teeming with unintended and tragic irony from Irish Prime Minister Leo Varadkar as he celebrated the passage of the referendum to eliminate the country’s ban on abortion: “I said in recent days that this was a once in a generation vote. Today I believe we have voted for the next generation.”

Does he realize what he just said?

This morning, I couldn’t help but read Paul Tripp’s words in today’s entry from New Morning Mercies in light of the news coming out of Ireland. Paul Tripp writes, “Individualism is not freedom; it is bondage. Living for yourself is not liberty; it is a self-imposed prison. Doing what you want to do, when you want to do it, and how you want to do it has never been the good life; it never leads to anything good. Making up your own rules and following your own paths leads to disaster. God calls you to himself and commands you to follow him so that, by grace, he may free you from you. In calling you to obedience, God is not robbing you of liberty, but is leading you to the only place where liberty can be found. . . . It really is true that individualism is a delusion, that joyful submission is the good life, and that Jesus alone is able to transport you from to the other.”

Lord, lead us not into temptation.