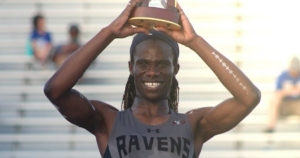 Last weekend, CeCe Telfer was photographed hoisting an NCAA Championship Trophy high in the air. Telfer’s smile is appropriate for such a victory, and one that I would imagine sharing if I had ever garnered a victory of that magnitude. . . which to be honest, is and was completely impossible! Telfer’s victory came in the Women’s DII Track and Field 400-meter hurdles final. Telfer’s winning time was 57.53. . . almost two seconds faster than the second place finisher.

Telfer’s victory is significant for a variety of reasons. For starters, Telfer had never before come close to making the National Championship meet during three prior years of eligibility. This was Telfer’s first time at the National Championship meet. . . and it culminated in a first-place finish by more than a hair. And second, during Telfer’s prior three seasons, CeCe Telfer was competing as a man who had been born and raised as Craig Telfer.

It’s understandable that the athletic world is up in arms over this development (see this article). The fact of the matter (if facts are still possible and allowable in today’s world as a point of discussion and grounding) is that gender is decreasingly seen as rooted in one’s anatomy, physiology, biology, and genetic make-up. Now, it’s rooted in personal preference and feelings, which are prone and even allowed to shift and change as frequently as moment by moment. We are now self-determined and ruled rather than other-determined and ruled.

As I think about the CeCe Telfer story. . . both the long-term story and the story of last weekend. . . there are some basic thoughts and commitments that I’m unwilling to sacrifice. . . because to do so would be dishonorable to God, His design, and His order for the world.

Second, none of us is better or worse than another. God is no respecter of persons. We shouldn’t be either. Don’t look at a person like Telfer as someone or something less.

Third, all of us inhabit lives and a world that is horribly broken. Brokenness is everywhere and it manifests itself in all kinds of ways.

Fourth, all human beings are redeemable.

Fifth, our brokenness yields confusion that can only be understood and seen for what it is when viewed through the lens of God’s order and design for His world. . . in other words, the way things are supposed to be.

And finally, if we fail to understand, embrace, and live out those prior statements, everything is negotiable. And when everything becomes negotiable we default into our sinful tendency to take control, to do things our way, and to propagate all kinds of brokenness. In effect, we lose touch with reality and we wind up losing our collective minds. I believe that as a culture, we are now there.

This week I’ve been reading Ryan T. Anderson’s book, When Harry Became Sally: Responding To The Transgender Moment.  Anderson describes the transgender ideology at embracing and promoting “a radical subjectivity in which individuals should be free to do whatever they wish and to define the truth as they choose.” That’s true (no pun intended). Anderson also states, “we shouldn’t be encouraging children to ‘transition,’ or making heroes and role models of those who have done so.” True as well.

When we aren’t working towards human flourishing according to God’s freedom-giving will and way, we are working to undo both ourselves and our world.