“How do I get my students to put their phones down?” That question started coming from a growing army of youth workers several years ago as I would engage them on the great blessings and difficulties of doing youth ministry in the new and fast-emerging digital age. Since that time, we’ve all become more dependent on and tethered to the good gift of our smartphone technology. But just as these new devices can be used for great good, they can also undo us in a variety of ways. And rather than letting life go on “as usual,” youth workers are in a unique position to challenge the status quo where it needs to be challenged, all for the good of our kids and their continued human flourishing. 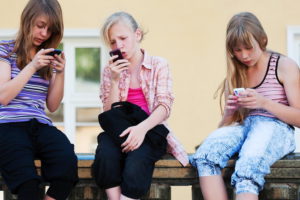 Early on, it was a brave and sometimes dangerous step a youth worker would take when they’d say, “Ok. . . put your phones down for the next hour of Bible study. . . the next two hours of youth group. . . the next three days of our weekend retreat. . . or the next week while we’re on our mission trip.” Not surprisingly, the reactions of the students ran the spectrum from hysteria to willing compliance. Sadly, the reactions of parents were often the same.

For several years now, I’ve been pushing a trend towards shut-them-down-no-phone times. On the one hand, this makes it easier to get kids to the point where they are fully present and engaged, rather than locked in a state of continuous partial attention. Chances are that they’ll learn better. But there’s also the benefit of facilitating the kind of human interactions and deepened relationships that they’ve been made for. Somehow, the presence of phones typically undermine this reality, making us physically present but relationally detached. This is what researcher Sherry Turkle describes as being Alone Together.

Youth workers who have given this a try consistently come back and say that the pushback has been either minimal. . . or, in most cases, non-existent. It seems that when you’ve been eating a cheap hamburger substitute your whole life and you’re suddenly introduced to filet. . . well, your taste buds develop new desires! Getting them over “try-it” hump always leads to a like-it mentality.

This week we posted the latest episode of our Youth Culture Matters podcast (embedded below), which features a winsome discussion with our gutsy and enthusiastic friend Donna Freitas, a researcher and writer (including the books Sex and The Soul, The End of Sex, Consent: A Memoir Of Unwanted Attention, and The Happiness Effect) who made national news a couple of months ago when she had the 22 students in her Adelphi University Class go “phone-less” for a week. You need to listen in to hear what happened!

Youth workers. . . I want to encourage you to carve out some times for your students where phones are absent. Start with your Bible Study. . . and use paper Bibles. Shut down for your weekend retreat and watch your kids come to life! And facilitate their full-presence on your next mission trip.