“At what age should I allow my son to have his own smartphone?” Without a doubt, that’s the question I get asked by parents of pre-teen boys and girls more than any other. The question is asked because wise parents who have a clue are aware of two conflicting matters. First, their children are sure to let them know that they might be “the last kid” in their circle of friends without a smartphone. . . and truth be told, no kid wants to be left out. Second, parents have some sense of how the smartphone will send kids down a rabbit-hole of good and bad from which there’s no turning back. Consequently, they are looking for guidance and direction on how to make the right smartphone decision for their child. 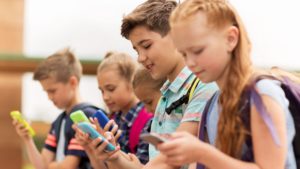 I’m guessing that most of you who are reading this right now are raising kids who spend a good portion of their waking and should-be-sleeping hours staring into that 15-square-inches of glass that’s at their fingertips close to 24/7. Recent research tells us that the tipping point where more than half of our kids have their own smartphones is now age 11. This means that there’s a sizable portion of early elementary aged children who already have their own smartphone.

As my dad used to say in our pre-digital world, “Privileges come with responsibility.” That’s some good advice we can pass on to our kids as we equip them to honor the Lord through the use of the good gift of technology. Of course, this requires diligence on our part. Parenting has actually gotten a bit more complex as we have to monitor where our kids are spending their online time. Living responsibly on the digital frontier should be rewarded with greater freedom. But when boundaries are crossed into the danger zone of sinful irresponsibility, we need to pull back and tighten the reins.

One of the most dangerous landscapes our kids will encounter is the digital playground of pornography. In a recent article, culture-watcher Terry Schilling writes these words: “A thirteen-year-old with a smartphone in 2019 has greater access to pornography than the most depraved deviant could have dreamed possible two decades ago. . . Not only has pornography become more accessible, it has become more diverse and perverse, as cultural vanguards and even mainstream institutions have promoted sexual fetishism as a new sort of societal norm, if not overtly, then with a wink and a nod.”

What are some steps we can take to stem this tide and ensure the sexual flourishing of our kids?

First, talk openly about God’s good gift of sexuality. It’s not a dirty thing, but a good gift to be experienced within the context of a monogamous, covenantal, heterosexual marriage between one mand and one woman.

Second, let them know that fallen expressions of sexuality are all around us. They will in fact encounter the reality, temptations, and dangers of pornography.

Third, remind them that when they do encounter pornography they should “flee from sexual immorality” (I Cor 6:18).

And finally, make wise digital media choices for them. Don’t put a smartphone with internet access in the hands of a child. For those older kids who do have smartphones, monitor their use and constantly remind them that their phone is a tool for bringing honor and glory to God.