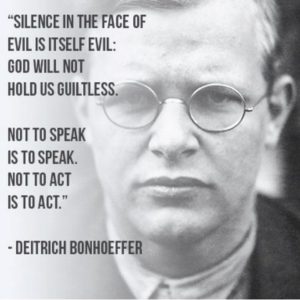 Over the last few days I’ve many times seen the quote about silence equaling complicity. It comes from a variety of sources, including MLK, Bonhoeffer, and Einstein. I agree. But I’m afraid that easy words. . . typed by thumbs and posted on social media for all to see while sitting comfortably away from the conflict. . . are often our best efforts at silencing our own silence. . . and thus leading to a feeling that we are not, in fact, complicit. We believe that our posting equals our action. That’s what’s been called slacktivism and virtue signaling. I very much appreciated the words of the Minneapolis Police Chief as he clarified that the most dangerous silence which equals complicity comes when we are in the moment, in the presence of evil, and we say/do nothing to stop it. . . as happened with several of his officers. That should never happen whenever and wherever we find ourselves in the presence of evil.

My great individual responsibility as I understand it right now is to first listen, to learn, and to quietly and prayerfully process it all in ways that I trust result in beliefs and behaviors that are good, true, right, and honorable. . . bringing glory to God rather than to me, any other human being, or group.

Perhaps something helpful is what I have already shared on a couple of occasions from Alan Jacob’s great piece, “I’m Thinking It Over.” Jacobs writes, “The internet is also a mugger, but what it demands is not my money but my attention and my reaction, and it wants them right now. And ‘I’m thinking it over’ isn’t an acceptable response.”

I know this to be true because on several occasions I’ve had people publicly (on social media) and privately (instant messages) criticize me for saying nothing. Reality is, my silence could be rooted in a desire to know more (rather than relying on the reliability of news outlets), a desire to ponder things with some good sense (I hope), a desire to keep from spewing ignorance (there’s already far too much of that out there), or not really having anything to say that adds to the conversation. After all, each of us has a limited amount of time in our days. I don’t need to fill or waste your time with social media posts that only make noise and throw fuel on the fire. . . especially when I have absolutely no idea what I’m talking about.

Lord, may our words and our actions these days be all about bringing glory to You and not to ourselves, as we listen, learn, and then act on your Kingdom priorities. Bring your shalom. . . in us and through us. . . causing that shalom to eclipse all those things that are not the way they are supposed to be.