Here’s the simple version of how his abuse of multiple young girls played out. . . in reverse.

The long-term damage caused by the church system is immeasurable.

The long-term damage and trauma he caused is immeasurable.

He is in prison for a long, long time.

He was sentenced to prison.

The judge shed tears as the horrifying charges were read.

Standing before the judge he admitted to and plead guilty to all charges.

The Christian community and church forsook their responsibility to care for the multiple victims.

The Christian community and the church mishandled the situation and allegations as they unfolded.

The Christian community and the church leaned into believing and supporting the perpetrator.

The curtain was pulled back by a brave young woman as she exposed her story of abuse at his hands.

He was a nice, kind, and fun-loving person who spent lots of times with kids inside and outside of the church.

Read this simple story again. . . this time from the bottom up. Why did I have you read it in reverse? Because you need to see that what started horribly, ended horribly. . . even though the perpetrator was exposed and sent to prison. The fall-out of trauma inflicted by the perpetrator continues. That trauma was multiplied by a system that should have stood for truth, but instead, smashed young lives even further.

This one story is true. . . and it has been repeated with slight variations in the in-between details who-knows-how-many-times over. But the beginning and the ending always sound the same. Far too many of you know this to be true. 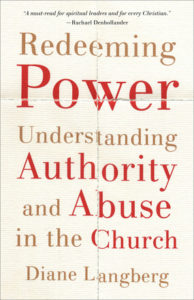 Earlier this year I read how this same story played out in the lives of a group of female gymnasts who were victimized by a serial abuser who was a master at grooming, cover-up, and deceptively building trust. I recommend Rachel Denhollander’s book What Is A Girl Worth? It recounts how Larry Nassar undid the lives of so many young girls. . . along with exposing the system that supported his abuse. This week I finished reading Dr. Diane Langberg’s brand-new book Redeeming Power: Understanding Authority And Abuse In The Church. It’s a must-read for every Christian. It shows how the body of Christ needs to change course by understanding the forms of power, how power is abused, and how to best respond to the abuses of power.

I believe that this book is so important and so timely that I would like to invite you to read and discuss it with me and a group of others during November and December. Redeeming Power: Understanding Authority And Abuse In The Church is the November/December selection for our online CPYU Reading/Discussion Group on Facebook. (Just click here to go to the group and sign-up). Once in the group, you are free to follow the conversation or add to the conversation. We’d love to have you.

In case you are wondering, here’s our reading schedule for Redeeming Power: Understanding Authority And Abuse In The Church: