“Students clamor for ‘safe spaces.’ Protesters smash windows and political leaders insist on saying that it’s important to hear their ‘voices.’ Parents speak of children’s behavior as ‘unhealthy,’ avoiding moral terms. We tend to think of these as recent developments, which have come upon us because of ‘cultural Marxism’ or some other alien invasion or academic virus. But this is not so. In truth, we are witnessing the fruition of a long history of antipathy toward moral authority that has been sponsored for decades by social scientists, intellectuals, professors, and activists. It’s not something new that is disorienting and demoralizing the West: It is a venerable set of attitudes encouraged by generations of psychologists, educators, child-rearing experts, and even ­religious leaders. Since the early 1920s, Western culture in general and American society in particular have become increasingly hostile to the conscious act of judgment.” So writes sociologist Frank Furedi in his recent article in First Things, “The Diseasing Of Judgment.” 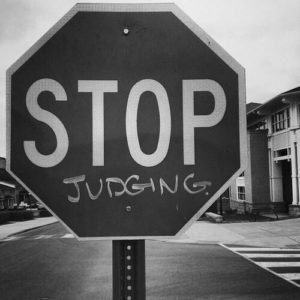 I would add that from what I’m seeing and hearing in a variety of Facebook youth ministry groups, accusations of “Don’t judge!” and “You’re judging!” are becoming more frequent among those who strategize to lead kids through a host of difficult ethical issues in today’s world with a balance of grace and truth. And for those of us who truly desire to minister the Gospel faithfully to kids with a balance of grace and truth, we’re going to be facing more and more accusations from kids, parents, culture, and even our ministry peers as the culture clock ticks further and further into the future.

Recently, I tasked our little CPYU Faith and Culture Youthworker Cohort with reading, responding to, and discussing Frank Furedi’s article. It’s a fascinating and sobering read that puts our current situation in historical context. The discussion was filled with loads of practical insights. Several from our crew followed-up with thoughts that I’m posting below. Parents and youth workers will find these follow-up thoughts very helpful, as have I. I’m still learning, and I’m thankful for the opportunity to learn from this CPYU Faith and Culture Youthworker Cohort. Take some time to read, ponder, and digest. . .

“As culture has pushed further and further away from anything that could be interpreted as judgmental, I think there has been an even further push to affirm anything a person grasps onto as their ‘own truth’. Our students experience this training against judgment from every direction. Even when they feel like something is wrong, they usually won’t speak up out of fear of being labeled as a bigot or judgmental. Beyond that, according to culture, if you’re not willing to speak up and affirm, your silence speaks judgment for you. As youth workers  we can help our students see that every person should be affirmed as a child of God loved by him, rather than affirmed for whatever identity they have chosen. When someone is loved, ‘judgment’ is more easily and openly received. Let’s not fall in with culture and neglect to help our students see sin as sin, and let us push them to be bold in love, unafraid of cultural pressure because they have the truth of God’s Word to stand on.'”- Jeff Travis

“Navigating ‘judgment’ has become complex in a culture that holds up authenticity, happiness, and the expression of our inwards feelings as core values. Anything that inhibits the pursuit of these values ends up being seen as oppressive and wrong. So what do we do? We, first of all, do need to teach students that we are designed in God’s image and that true life is found in Christ — in contrast to the cultural narrative that we are designed for personal happiness and that true life is found in being authentic to myself and expressing my individuality in whatever ways I feel necessary. Secondly, let’s help students to more clearly define judgment, because there’s a difference between condemning others versus discerning matters of moral right and wrong from the Scriptures. Thirdly, let’s carefully establish our ministries as ‘safe places’ for our students, where they do feel safe confessing their sin and tangibly experience the welcome and grace of the Gospel. But, again, we will need to define ‘safe place’ carefully and differently than the world will. Be a place where, when students reveal their sin, there’s not a posture of readiness to condemn; be ready to extend grace, listen well, meet students where they are, and walk them toward righteousness at whatever pace the Spirit enables them to. One takeaway I really appreciated from our conversation was the need to train our leaders in this area. Training leaders to respond with grace, listen well, and woo students to repentance will go a long way in developing a Gospel-shaped culture in your student ministry. It helps students to tangibly understand the Gospel truth that we are simultaneously morally bankrupt and safe in Christ. Helping them grow in repentance and righteousness will require ‘judgments,’ but these are Biblical judgments that point us to the true source of life, Christ.” – Linda Oliver

“We live in a culture where people are quick to judge and even quicker to judge people for judging others. This can lead to students growing up in a culture where they are being extra careful not to offend others. This can cause students who are cautious and timid to the fear of how others will respond to their actions and words. We want to be leaders who help empower students to fulfill the plans that God has for them. If these students are going to do this, then it will eventually become offensive to some and they will be judged. We can help students journey through life and realize that following Jesus may ultimately lead to a life of judgement by men, but union with God.” – Kyle Hoffsmith

“I get the judgment question a lot. And because each situation with a student is different, I wanted to jot down some lines of reasoning that I use with my students.

“It seems that within our current culture, we have reached a mutually agreed upon decision that “I don’t judge you and you don’t judge me”. Each of us can do what we want, and we have the intellectual cover to ignore our pesky conscience. One cannot help but see this reflected within the Church, as many denominations and churches are hesitant to label anything as wrong except in the blandest of ways. There is some evidence this has trickled down into youth ministry. If you’re rarely told what you are doing is wrong, then it is both jarring and threatening. There seems to be a strong desire for sin to be dealt with indirectly or obtusely. What does that look like on a practical level? Ministry that focuses on the love of God while neglecting His holiness. Ministry that eschews accountability for fear of offending or hurting feelings. How loving is it if our inoffensiveness and non-judgmental attitude keep us from sharing God’s truth about sin? In Proverbs 27:17 we are called to sharpen each other “as iron sharpens iron”. This is a painful but necessary aspect of being part of a body of believers. Could it be that “judgement” in this world helps students when the ultimate Judgement day arrives?” – Jordan Martin

“Over the past decade, it seems that phrases like ‘mind your own business’ and ‘good fences make good neighbors’ have been reworked into ‘you do you’ and ‘don’t yuck their yum.’ There’s a whole world outside of our zip code that is unique, complex, unfamiliar, and sometimes disorienting. There’s a bit of a challenge when we build relationships with people from different backgrounds, cultures, ethnicities, age groups, or insert demographic here. The step into the ‘you do you’ mindset is rooted in not wanting to come across as pretentious, self-righteous, or culturally ignorant. It seems that culture is okay with you living your own life, so long as you’re not hurting anyone else. There’s a bit of a logical ouroboros (a snake eating its own tail) that comes with this mindset. In an attempt to provide people with a judgment-free zone or a place that is free from ‘antiquated morality,’ people have set up their own system that’s just as rigid. ‘No authoritative moral source’ is still a system of morals – with the individual as the authoritative figurehead. Believing that people should live and behave according to the ‘judgment-free’ doctrine opens the door for them to be judgmental to people with different opinions and convictions. And who is ultimately victorious in this scenario? The fact that people despise Christians shouldn’t really be that surprising to us.  We serve as ambassadors to a Kingdom with a code of morals that flies in the face of whatever the agenda of popular culture is at the time. We serve a King who has no equal; a King whose authority can’t be questioned or dismissed. What’s ironic is when you consider the diversity and equality that comes in the Kingdom of God, it’s not dissimilar from what the woke crowd seems to be pursuing. At the risk of over-generalizing, it seems as though they want the end result and not the means by which it’s obtained. The invitation for disciple-makers is to present the fullness of the Kingdom of God through the Gospel to all people, keeping in mind that speaking the truth in love means rejoicing with the truth (1 Cor. 13:6)” – Dan Hurner

“You have probably heard the words judgement and judgmental thrown around recently. These are words that we can hear about how people treat one another, they could describe a person’s experience with a church, or they could be used in how a student felt judged on social media. Our culture is exceptionally fearful of judgement because to many people it represents critical response, hurtful thoughts, rules, control, and a lack of care. We see this in how many people govern their social media presence. People will at times post a photo but then delete it if they don’t get the likes, comments, or engagement they wanted. People have used hashtags like ‘felt cute…may delete later.’ Others wipe their whole social media account and attempt to start fresh so they can get what they want out of it. Our culture is rife with ways we are seeking to get around judgement or being judgmental, but the truth is that judgement isn’t a bad thing when handle in a God-centered way. From the very beginning of the Bible in Genesis 3 we see that judgement was enacted because of Adam and Eve’s sin. God handed down righteous judgement that He used to protect them, challenge them, and push them to continue to live in right standing with Him. Judgement isn’t bad, it is a correction from something sinful or problematic. What we must seek to understand and teach to our students is that judgement is something God designed for our good. Without judgement there is no right or wrong and we can simply live morally ambiguous lives. But godly righteous judgement is meant to help us grow and move away from our sin as we seek to reflect Jesus to the world. We need to demonstrate godly judgement as leaders and teach our students about the reason there is judgement and show them how is handled well. It isn’t about control or restriction but about pointing us back to Jesus as we acknowledge our sin and brokenness.” – Nick Mance