I’ve heard it said a few times and in a few different ways just over the course of this last week. Someone preceded an observation about someone else with the words “Now I’m not judging. . .” Another person said, “I’m not here to judge. . . “, and then followed up with nothing other than a judgement call about someone else’s behavior. And still another said, “I know we’re not supposed to judge. . . but. . . ” 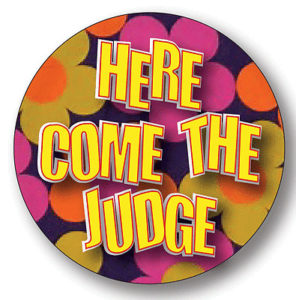 Judgement has become a dirty word in today’s culture. Because Christians are oftentimes labeled as “judgmental”, there’s been a trend in the church, our Christian homes, and our youth ministries to back-pedal and watch our words perhaps too carefully, all in an effort to avoid being labeled as “judgmental.” Let’s be honest. Nobody wants to be called that, do we?

One of the places where it’s most prevalent, painful, and even frustrating is in our homes. A caring and involved Christian parent may set up boundaries regarding friendships for their kids. The offended teen might respond with a biting retort. . . inronically, in fact a judgement in and of itself. . . labeling mom and dad as being judgmental. More often than not, the teenager is simply being faithful to the worldview that’s saturated today’s youth culture. It’s a worldview where everyone may decide for themselves regarding right, wrong, truth, and error. As a result, who am I or who are you to challenge anyone else’s beliefs or behaviors? Raising kids in this kind of moral free-for-all is incredibly frustrating.

A few years ago, my buddy Duffy Robbins said something in one of the classes we co-teach that was so helpful to everyone in the room. . . myself included. Duffy differentiated between judgement being understood and practiced as condemnation, and judgement being understood and practiced as biblical discernment. There is a huge difference, and we can’t mix up one with the other or we risk throwing out the baby with the bathwater. Condemnation of individuals for sin is God’s business and God’s business alone. Of course, what we’re talking about here is taking the call on one’s eternal destination out of God’s hands, and into our own.  We are in fact to engage directly and lovingly with the brother or sister caught in sin. But judging in a condemning way is typically done out of hatred and with no concern for the welfare of the other. But judgement practiced as biblical discernment is done out of love as a way to steer someone we love from that which will undermine their flourishing, into that which conforms to God’s will and way. And it can’t be emphasized enough that we must love people enough to tell them the truth.

In First Thessalonians 5: 21-22 we are told that discernment is necessary if we are going to be able to tell the difference between truth and error, and right and wrong. Specifically, Paul is talking about prophecy and the dangers of false teaching, but the principle applies to all of life. In Ephesians 4:14 we learn just how necessary a commitment to being sharp at discernment really is, as without it, we risk being “tossed to and fro by the waves and carried about by every wind of doctrine, by human cunning, by craftiness in deceitful schemes.” I think it’s fair to add our susceptibility to what Paul calls “the course of this world” and we know as “the Spirit of the times” to this list of dangers that biblical discernment is meant to derail.

All of us are susceptible to believing lies that lead to behaviors that not only undo us, but are very pleasing to the one who is out to wreck God’s good world. I have folks in my life who I know are committed to honing their skills of biblical discernment. I admire and trust them. And if I step out of God’s will and way I also trust them to step in and “judge” me. . . lovingly and in a way that sets me back onto the narrow path that leads to life.

We hit this topic on today’s episode of our 1-minute Youth Culture Today podcast. . .