All of us have things from our childhood that we think are better left forgotten. . . flushed from our memories. . . washed away forever. For me, it’s that seemingly never-ending chunk of my childhood where I was a late-bloomer in terms of any athletic ability. This was a tremendous liability in a pre-Xbox world where every waking minute we weren’t asleep or in school, all of us neighborhood boys were outside competing with each other in any variety of athletic contests. I was younger than everyone else, smaller than everyone else, and more expertly uncoordinated than everyone else. It stunk. . . and it hurt.

Even though I eventually grew in age, stature, and coordination, those years seemed to last forever. Now that I’m an adult, I still find myself swept back into those memories when I see or hear about kids enduring the same kind of stuff in today’s world.

A few years ago, my wife and I were away from home for a speaking engagement. We found the local high school stadium early in the morning and got out on the track. After a few laps a freshman gym class came through the gate led by their female teacher. The teacher gave the students a choice, and quickly those who wanted to join a game of flag football separated themselves from those who were satisfied to just walk around the track. It just so happened that all the girls went straight to walking . The guys lined themselves up on the side of the field.

On my next lap around I saw something happen that took me back to that painful time in my own childhood. I saw something unfolding among the guys on the sideline that made me cringe. It was clear that during my last lap two “Captains” had been chosen. Of course, they were the two most athletic looking guys in the group. “Nothing’s changed,” I thought. They had already taken turns choosing teams and only 5 guys remained. The last “men” standing were a strange combination of skinny, overweight, and unathletic looking kids. I could tell how uncomfortable the whole thing was for each. I knew exactly what they were thinking and feeling. . . .”Why me, again?”. . . “Choose me, choose me, choose me please.” . . . “Oh God, please don’t let me be the last one chosen.” 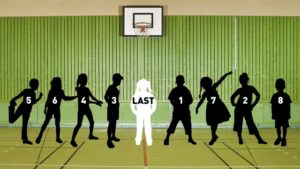 As much as I wanted to look over my shoulder to see who was picked last, I couldn’t. It was just too painful and it broke my heart. Why? Because I remember being there myself over and over and over again during my own childhood. Watching it happen in a gym class brought back all the painful feelings and it made me wonder what in the world that teacher was thinking. I was the youngest of the neighborhood boys who gathered every day after school to play the sport du jour. At the time I never thought about being the youngest. Instead, I always thought about consistently being the last one picked. I always dreaded it. It always hurt. It never got easier. I saw it all on the faces and in the postures of the last five.

I’ve often lamented the reality that in today’s culture we sometimes try to be too fair. . . you know, everybody gets a trophy or ribbon just for showing up. No, we don’t want to reward mediocrity. But at the same time, we live in a world where, sadly, athletic prowess and achievement is the standard for value, worth, and acceptance. Do well, and you’re better than OK. Anything less and you’re worthless. In addition, narcissism is the default setting for our kids. Researcher Dr. Jean Twenge has studied the epidemic of narcissism sweeping through our culture. She’s concluded that millennials are the most narcissistic generation ever. They’ve grown up worshipping the holy trinity of “me, myself, and I.” As a result, they selfishly jockey to be first in everything, including any competition.

As parents and youth workers, we need to promote a lifestyle where all of life is informed by our faith in Jesus. This is the kind of transformational thinking and doing that the Apostle Paul instructed us to embrace in the opening verses of Romans 12. We need to strike a balance. That’s caused me to ask this question: Do we as parents and youth workers buffer kids from the pain of unjust pecking orders, or do we propagate that pain. . . even unknowingly?

Here are three simple suggestions that I’d love you to consider consciously building into your own family and/or ministry to teenagers in an effort to strike the proper balance in a culture that’s horribly skewed in the wrong direction.

First, value every kid you meet as Jesus values every kid you meet. Youth workers. . . when the new kids come into the room, which kids are you drawn to? Think about it. Are there any patterns? Make an effort to go first to those who are usually gone to last. . . or maybe never gone to at all. Get their name, ask questions, and make them feel as important as they really are. Chances are that those who fall through the cracks everywhere else in life might fall through the cracks in your youth ministry. Remember, the same kind of narcissistic aspirations that infect youth culture infect adult culture. It doesn’t end when we grow up. Instead, we have to make a conscious effort to recognize it in ourselves. . . and then go out of our way to – with God’s help – make it disappear from our lives.

Second, be a model of affirmation. Look for and encourage the strengths in every student you encounter. Many kids not only have to suffer for not measuring up among their peers, but they also take constant heat from parents who believe that their kids are always falling short. Kids whose parents value the same things the culture values oftentimes live vicariously through their teens. I’ve seen and heard too many sad and painful stories over the years of parents whose socially-defined and pressure-filled expectations flattened and destroyed their kids. One of the saddest stories I remember was that of a guy who was on my high school football team. After Phil once again didn’t make it into the game, his frustrated and unreasonably expectant dad embarrassed him in front of a host of people as players and fans walked off the field. “Hey Phil,” he yelled. “When you get to the locker room you might want to get those splinters out of your rear end.” Phil was one of the most defeated and discouraged kids I knew. I’ve since learned that he took his own life before he turned 40. I fear that Phil was not only discouraged by those who made sure he noticed his lack of athletic ability, but who never took the time to recognize and encourage the abilities that God had given him. When you look for and encourage strengths you not only build resilience into kids, but you model an attitude that might just go viral in your group.

Third, never engage in the silly playground politics of choosing captains who pick sides. If you do, you’ll be stroking people who most likely don’t need the strokes, and you’ll be stabbing kids whose emotional bleeding has gone on far too long. There’s no place for pecking orders in our youth ministries.

Yes, God redeems our suffering and turns things around. In other words, getting picked last can build character and make us more sensitive as adults. In fact, my wife and I took a lap while talking about that very reality. She said, “It hurts, but we got through it!” “Yes,” I answered, “But I do fear for those kids who have nobody in their lives offering a positive, Godly adult presence that helped us weather this storm.”

In the end, we don’t want to be parents or youth workers who pile on the hurt when the hurt might already be too much to bear. Our homes and youth groups need to be places that ooze these words of Jesus: “Come to me all you who are weary and burdened, and I will give you rest.”