When I read the Bible, I sometimes find myself shaking my head in disbelief as I ponder stories that reveal the absolute stupidity of God’s people. For example, this morning I was reading in the Old Testament book of Judges about Gideon and the people of Israel. . . God’s chosen people. . . who had once again fallen into a cycle of disobedience, erecting Asherah poles and altars to Baal. . . among other things, I’m sure.

How could they be so ignorant that they would not only wander away from God, but they would wander into indulgence in idol worship? Geez. And then I look in the mirror and the answer comes. In today’s world, the human heart remains the same. . . while the idols look a bit different. 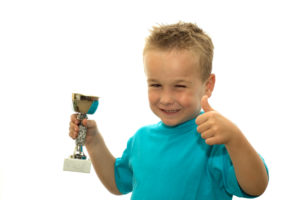 As I write this, I’m sitting in Panama City Beach, Florida. I’m here for a youth worker conference. Thousands of others are here after having traveled long distances at great expense of time and money with kids who are playing in youth sports tournaments. Girls’ Softball seems to be the thing since I’ve been here. Seeing this reminds me how sport. . . playing and spectating. . . so easily moves from being a good thing to being an ultimate thing in our lives. In fact, it’s where too many of us go to find our identity. It’s just one of our 21st century idols.

With that in mind, I recently interviewed Tim Sceggel about kids, families, and sports on the latest episode of our Youth Culture Matters podcast. Tim is a college Athletic Director who has thought deeply about the Christian faith and sport. Our conversation is one that every youth worker and parent should hear. (I’ve embedded it below or you can listen here.)

As I was thinking about the idol of sport, I remembered something I had written on the topic back in 2008 on the occasions of watching my oldest son playing his last organized games with his college team. . . and I share it here. . .

Last Saturday – as I’ve done on numerous spring Saturdays for the last nine years – I attended one of my son’s lacrosse games. This year it’s somewhat bitter sweet as we’re counting down the number of games left in his career. He’s a college senior. Once that final whistle blows sometime in May, it’s over. It’s been fun to watch. Not only is his organized lacrosse career over, but practices and games too numerous to count from a variety of other organized sports. . . . well, that’s all coming to an end as well. He started all this stuff when he was five-years-old with that incredibly boring and slow-moving phenomenon known as “T-Ball.” It is, however, anything but boring and slow-moving when you’re chuckling at your own kids out there on the field.

Last Saturday’s game afforded a great opportunity to sit on the sidelines and catch some perspective. I’m not sure I would have gone too deep in my thoughts had it not been for the pleasant surprise of seeing my old friend Ron in the stands. I’ve known Ron for over 25 years. Even though we live fairly close to each other, I haven’t seen him for a few years. Ron was at the game to see his nephew play for the opposing team. Ron’s played and watched his fair share of games over the years. I remember watching Ron play football on TV when we were both in college. I didn’t know him personally at the time. He was busy playing linebacker for Penn State. Not surprising. He grew up on a farm in a family of seven kids. All were stellar multi-sport athletes. It could have been something in the water those kids drank on the farm. Most went on to be scholarship athletes in college. One of Ron’s brothers quarterbacked his NFL team to a Super Bowl championship.

Ron and his siblings all married athletes. Like some sort of Russian Cold-War era athlete factory, all of the couples have given birth to kids who all happen to be, you guessed it, athletes. In fact, the next generation of Ron’s family is so incredibly talented, that Sports Illustrated ran a story on them last year. I think all of them have gone on – like their parents – to be college athletes. Sometimes it seems like life isn’t fair doesn’t it? . . . All I want to do is be able to dunk a basketball. . . just once. Never gonna happen though. It’s not in the genes. I’ll bet Ron’s mother was able to dunk a few in her time. Not fair.

So Ron and I are catching up on life in the stands. We talk about our wives, our kids, and what’s been going on in our lives since the last time we saw each other. Then, we talk about how God has graciously – through both His Word and the circumstances of life – taught us lessons about what really matters. Knowing how easy it is to lose perspective and to make the mistake of seeking identity in our own play or the play of our kids, our conversation turns to processing what’s happening on the field through the eyes of God’s Word. We talk about how athletics are a great and wonderful gift as we sit and watch a group of guys run up and down the field giving glory to their Creator as they play. Some of the players are out there doing it intentionally. Others don’t give a thought to their Creator. . . but their athleticism, agility, and joy all point back to the One who made them. . . even if they have no clue.

As I climb down out of the bleachers and walk away from my conversation with Ron, I rehash our exchange and the perspective it brought. Our identity can only be found in Christ alone. Not in our talents or play, or in the talents or play of others. We should enjoy those things, but only as we ultimately find our identity in Christ. Anything else is idolatry. I realize as I watch my 21-year-old son out there that life is like the grass of the field. It pops up and goes by so incredibly fast. Just yesterday he was struggling to hit that ball off a tee. Where did the time go? And, I realize that when all is said and done, it’s not the score or accolades that matter. Rather, it’s what you’ve allowed God to teach you through your experiences and circumstances, the highs and the lows – both on and off the field – that’s most important. And, that the “whatever” it is that you do is given to God as an offering of praise. I love how Eugene Peterson translates it in The Message: “So here’s what I want you to do, God helping you: Take your everyday, ordinary life – your sleeping, eating, going-to-work, and walking-around life – and place it before God as an offering” (Romans 12:1).

One other thought. . . . when it comes to church-league sports, why do we find this so hard to remember?